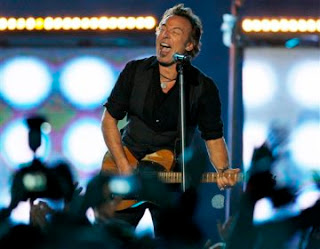 (Bruce Springsteen performs at halftime at the Super Bowl in Tampa, 2/1/09.)

Does it matter that the old man skips some of the high notes nowadays, even in a 12-minute Super Bowl halftime set? Nah, not really.

Do we care that he held the mic out to the audience for the big guttural yell that provides the exclamation point for "Born to Run"'s passionate declaration that "I wanna die with you out on the streets tonight / in an everlasting kiss?" Nuh-uh, we'd probably do the same thing.

Do we view his having signed on for the gig in the first place as a shocking betrayal of his working-class roots, progressive politics, and rock-and-roll soul? If you think he didn't do that a long time ago, we've got four words, sweet pea: "Dancing in the Dark." (Wa Po sportswriter Liz Clarke has a thorough and compelling analysis of her tortuously long process of disillusionment with the Boss, a process that began with the aforementioned pop ballad from 1984's Born in the USA [reaching for the mainstream much?] and culminated in tonight's sellout in Tampa. It's a must-read for Bruce fans, though it will hurt to make your way through the story as told by someone so devoted to Springsteen that she haunted the bars of the Jersey shore in the early 80s in hopes of catching a set by the rising young rocker and traveled the country to catch multiple stops on his increasingly ambitious tours.)

Anyway, no, we don't begrudge the Boss his vocal shortcuts or his decision to pimp a new record (Working on a Dream) on one of the largest pop cultural stages in the universe. Hell, dude's got kids to educate, and we've made a few compromises of our own along the way. Haven't we all, tramps? We thought that on the whole the mini-gig was a success: a nice mix of old ("Tenth Avenue Freeze-Out," "Born to Run," "Glory Days") and new ("Working on a Dream"), the band in fine form, and Bruce yukking it up big for the crowd.

No, what concerns us is not the quality of the voice or the venues for the performances. After thirty years of making their own journeys through the tunnels and out to the backstreets to meet the man, the aging former Jersey Girls of Roxie's World are concerned with the quality of the music itself. This is a point Clarke makes, too, in a devastating section of her article focused on the cringe-inducing quality of some of Springsteen's lyrics in recent years:

It pains me to say it, but I think Bruce needs a thesaurus. Better still, an editor -- someone bold enough to send back his first drafts and tell him he can do better. There are several at The Washington Post. Maybe I could recommend one. Failing that, I'd like to propose a list of words he can't use anymore: "gypsy," "biker," "devil," "angel," "highway," "road" and "river," for starters. He has plowed this terrain enough.

The moms agree, wholeheartedly. At his best, Springsteen produces songs that are masterpieces of lyrical craftsmanship -- taut lines that evoke characters, settings, and situations as vividly as a fine short story, as suggestively as an impressionist painting. Pick an early song at random to see what we mean:

Clarke offers several excellent examples of the clunkers and clichés that have cropped up in Springsteen's lyrics in the last few years, including the execrable "Mary's Place" from The Rising ("Meet me at Mary's place, we're gonna have a party / Tell me how do we get this thing started"). She is kind enough to overlook the flat-footed music that is too often the vehicle for these uninspired lyrics. From first listen, "The Rising" has always struck Moose as a musical re-make of a song that should never have been recorded in the first place, Steve Miller's "Jet Airliner." (Click on those links, and I swear you will agree that Miller has grounds for a lawsuit.)

Goose has maintained for years that the Boss was suffering from a creative crisis, finding it harder and harder to find anything new to say or do in the young man's genre of rock 'n roll. In some rare and wonderful projects -- The Ghost of Tom Joad (1995), We Shall Overcome: The Seeger Sessions (2006) -- he has found ways to use his age and experience to advantage, deeply mining a range of American musical idioms to bring to his audiences the rich history that made rock possible. The teachers around here may be biased, but we like Bruce in the role of rock pedagogue. He's a smart guy. It suits him, and he doesn't have to spend all his time trying to relive the glory days of his youth on the boardwalk to do it.

We've got the new album in the house but haven't listened to it closely enough yet to render a verdict. Our hunch, though, is that Working on a Dream won't be the breakthrough we've been hoping for, at least not if the video of "My Lucky Day," which Moose sardonically calls "My Bad Hair Day," is any indication. Bruce looks old and disheveled, and the song is just so-so.

Bruce, baby: Get a haircut, lose that odd mound of beard under your lip, and don't release another record until you've got something new -- or something brilliantly, powerfully old -- to say. We're guessing that gig you played tonight will get all three kids through college and maybe pay for a nice cruise for you and Mrs. Boss. Relax. Put the Stratocaster away for awhile. Inspiration will find you again, maybe out on the back porch rather than the backstreets, but it will find you. And if it doesn't, so what? You wrote the greatest rock 'n roll song ever written. The highways are jammed with broken heroes who never accomplished anything remotely comparable to that. Maybe you were born to . . . pay the mortgage and retire?
Posted by Roxie Smith Lindemann at 8:55 PM