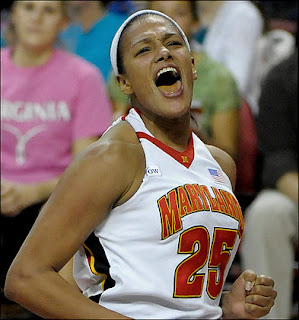 Marissa "Shoulders" Coleman scored a season-high 28 points last night to lead the 11th-ranked Lady Terps to a 94-78 victory over 17th-ranked Virginia, avenging their loss a couple of weeks ago in Charlottesville. Coleman also moved into second place on QTU's all-time scoring list, with 1,931 career points, passing the great Vicky Bullett and lagging behind only former teammate Crystal Langhorne.

Wa Po's Camille Powell commended the Terps for a "gritty, focused effort." Coach B. said the contest felt more like a heavyweight match than a basketball game.

Shoulders played an inspired game, according to Goose, scoring the Terps' first six points and putting up a couple of monstrous blocks. It was a team effort, though, with fellow senior Kristi Toliver contributing 25 points and 5 assists, while junior Dee Liles managed 12 points, 13 rebounds, and 3 blocked shots, despite having the flu.

Shoulders ended the game with leg cramps and bloody knees that required two stoppages of play so she could change out of her blood-stained shorts -- right in front of dog and everybody there at the Comcast Center!

According to Wa Po, Coleman said of her public presto-changeo:

"We could've had a malfunction. That could've went bad," said Coleman, when asked why her teammates didn't shield her from the crowd. "I'll have to talk to my teammates about that later."

Moose is in seclusion today, mourning the fact that she was not there last night to tend to her fallen heroine in her moment of need due to a pre-existing professional commitment. (It was an important commitment and Moose was happy to stick by it, but sometimes a girl does wish she could be two places at once.) She could have raced to the floor to apply a tourniquet to Coleman's wounds. She would have gallantly offered up her bright red Lands' End Terps jacket to shield Coleman from the 7,053 sets of prying eyes. "The game must go on!" she would have shouted to the whistle-happy refs for going all ER over the sight of a little blood. "And don't use the term 'stoppage,' dammit. 'Stoppage' is not a word, or it shouldn't be. It is a crime against language!"

Fear not, Terps fans. Moose will be in the stands on Sunday when Shoulders and company face the Scarlet Women of the moms' alma mater, Rutgers. Coach C. Vivian Stringer's crew may have fallen to 14-9, but they always give the Terps fits with their scrappy defense and their slower style of play. The moms will be there with their signs. And maybe, you know, a first-aid kit and an extra set of clothes.

Just in case.
Posted by Roxie Smith Lindemann at 8:53 AM