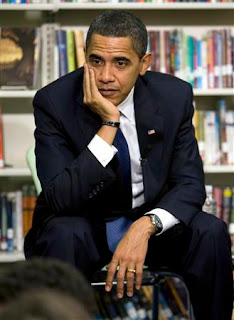 The story is old at this point (blame my typist, of course), but the image is worth a thousand words and it hasn't gotten a lot of play, so we toss it up anyway. It accompanied Wa Po snark-meister Dana Milbank's piece this morning on the president and first lady's trip to a DC charter school yesterday to read to second graders after it was announced that Obama's nominees for chief performance officer (Nancy Killefer) and secretary of health and human services (Tom Daschle) had withdrawn from consideration for their posts because of tax problems. Obama went to the school and read the kids "The Moon Over Star," because, he said, "We were just tired of being in the White House."

To which Milbank quips, predictably yet deftly, "Good thing it wasn't 'My Pet Goat.'"

Note to the New American President and to All Future American Presidents: Dontcha think that those awful pictures of Shrub on September 11 -- surrounded by kids and with a look at once vague and panic-stricken on his face -- emblazoned as they are in the nation's memory of that terrible day -- pretty much mean that no president should ever again be caught reading to schoolchildren? Seriously, guys. Don't you realize that seeing the president in that setting, if it doesn't trigger a national fit of post-traumatic stress disorder, will at a minimum invite viewers to see a resemblance between Mr. Obama and his hapless predecessor, especially if he lets his guard down in front of the cameras and allows himself to be photographed looking as weary, exasperated, and un-presidentially human as Obama looks in the photo above?

Mr. President, the cameras are never, never not on you. Cameras helped to make your candidacy, in part because you looked so at ease in front of them, but they can undermine your presidency if you are not careful. Two weeks into the job and nothing more than a couple of disappointing personnel snafus and -- oh, yeah, the small matter of global economic collapse -- on your mind, and you look like a guy who's already had enough.

"We were just tired of being in the White House." Wow. Really? Why do we think the new Belle of Foggy Bottom would never have said anything so ungracious about living in the people's house? Maybe that's why you made her the nation's chief diplomat. There's one personnel decision you didn't blow, Mr. President. Good call. Good call.
Posted by Roxie Smith Lindemann at 9:12 PM