Shoulders Shot of the Day 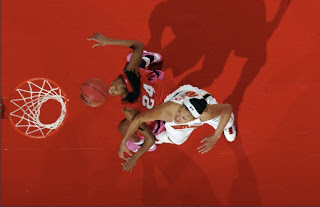 Well, not quite all. Rutgers coach C. Vivian Stringer had a pretty clear sense of why her team was so thoroughly whupped by the surging Turtles of Maryland:

I thought that Maryland played better defense than I've seen them play. I think they enjoyed playing defense today, and they were aggressive. Obviously the ball wasn't going in the basket, but we had opportunities. I thought that we may have stood around a little too much, and they put pressure on us as a group.

It's true. Rutgers has a nasty habit of winning games by taking teams out of their rhythm. They slow things down, burn so much time off the shot clock that their opponents are likely to nod off on the defensive end of the court. That strategy worked against the Scarlet Women today, because they fell behind and couldn't play quickly enough to catch up. Maryland stayed sharp on defense and didn't get rattled on the offensive end of the court. Rutgers got into foul trouble, and Maryland made 23 of 28 free throws. Rutgers only made it to the line 7 times, which either means Maryland's inspired defense was also remarkably efficient or the refs are on the payroll at QTU.

The Terps only have 4 games remaining on their schedule before tournament season starts, including Senior Night, Feb. 27, against Boston College. On that sad night, the jerseys of Kristi Toliver and Marissa Coleman will be hoisted into the rafters at Comcast Center. Moose wonders if the shoulders of Shoulders' jersey will be arranged in the maximally exposing manner that earned the star her nickname here in Roxie's World. Moose thinks they should be. She is even willing to climb up to the rafters every single day to make sure the shoulders of Shoulders' jersey are carefully calibrated to her specifications, because Moose is sure the Lady Terps would not have won that national championship back in '06 if Shoulders had not had maximum exposure and complete freedom of movement in this particular, powerful, elegantly sculpted part of her finely tuned athletic body. When Coleman's career is but a memory and that jersey in the rafters is the only trace of her left in the building, Moose will feel better knowing that Shoulders' shoulders are arranged just so. She thinks it will inspire future generations of QTU players to . . . greatness.

Oh, boy, kids. Why do I get the feeling March madness is off to an early start for some fans around here? Wake me when it's over, will you? Peace out.
Posted by Roxie Smith Lindemann at 11:35 PM