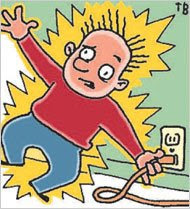 My typist pays the utility bills in our household (Goose pays for most of the food and liquor, so it comes out about even) and has been grousing all winter about the soaring cost of electricity. Our house is heated by gas, not electricity, so our winter electric bills used to be pretty negligible -- under $50 a month, according to Moose, though her paper records don't go back to that now remote happy time. The other day, however, she got a bill for $188, which put her into an official tizzy over the fundamental unfairness of life in the 21st century. "How are people managing these costs?" she said to Goose. "Why have they gone through the roof, when our patterns of consumption have not significantly changed? Why aren't people kicking and screaming, demanding answers from the utility companies?" "There, there now, dear," Goose replied. "The revolution will be starting any second now. Relax. Have a drink. Let's turn out the lights to save a penny or two."

As it turns out, Moose is not the only consumer feeling the shock of higher bills for electricity. The problem became news last night and this morning after Maryland's Public Service Commission summoned utility officials to testify yesterday at a hearing held in response to complaints about soaring rates and the record number of shut-off notices that are being sent out to customers who have fallen behind on their bills. Close to 3 million such notices were sent out in 2008 by the utilities companies serving Maryland and DC, according to data cited in the Wa Po story. 3 million!

To the shock of absolutely no one, the response from the utilities is to blame colder weather, longer billing cycles, and the inefficiency of customers' electric heating systems. Oh, and the maddening tendency of customers to hang around the house over the holidays and prefer not to freeze their widening rear ends off.

Boy, did that make Moose mad. As I have already mentioned, our house is heated with gas, not electricity. She pulled out bills going back to the winter of 2004-05, the last winter in which our electric bills averaged below $100 a month, and notes a jump in the charge per kilowatt hour from just over a nickel to the current rate of over 11 cents. "Colder weather," she snorted, after she had carefully spread all the bills out on the counter and gotten out a magnifying glass to study the costs per kilowatt hour. "Those evil bastards!"

Wa Po offered an explanation of the situation that struck Moose as more in line with the results of her counter-top data-mining exercise than the excuses offered by the utility companies:

Higher wholesale energy prices continue to push up electricity and natural gas costs, a result of deregulated markets in the District and Maryland. A typical monthly Pepco bill for District customers is $103.67 today, compared with $58.16 in 2004.

No, really? Could it be that what we have here is another example of what a raw deal deregulation is for consumers and what a super-fantastic deal it is for energy companies? Hard to imagine, isn't it, when that whole scheme was pitched to us as a way of lowering our costs, because, you know, that's what competition does? So, now we find ourselves in the midst of economic meltdown with households facing out-of-control costs for basic necessities as well as the cost of all the bells and whistles (cable TV, high-speed internet, and cell phones that put the whole world in our pockets) we decided were necessities somewhere along the way.

Eek, people, this ain't going to be pretty. Whatever shall we do?

Fortunately, the basketball tickets are already paid for, so tonight we'll go to Senior Night for the Mighty Women of Maryland over at Comcast Center. We'll cheer tonight -- and cry over the household bills tomorrow. Free drinks at Ishmael's, the seedy yet cozy bar around the corner from the global headquarters of RW Enterprises, LLC, for anyone with a ticket stub from the Terps game. Stop by! We'll swap tips on how to survive the coming catastrophe -- or just work on our brackets for March Madness. Wevs, kids -- It's Friday! Peace out.
Posted by Roxie Smith Lindemann at 12:22 PM