Well, Maybe Not "Frequently Asked," But In Case You Ever Wondered . . . 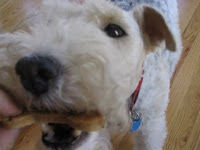 Is Roxie a real dog? She was, alas, a real and marvelous wire-haired fox terrier who was as smart, willful, exuberant, and loyal as WFTs are supposed to be. She was born April 1, 1994 and lived an amazing embodied life that ended in the loving arms of her human companions on December 30, 2009. You can learn many fun facts about Roxie and her time on earth by reading this post. You can get the scoop on her play's last scene by reading this one.

Who are Moose and Goose, and how did they get their blog names? Moose is Marilee Lindemann, the typist for Roxie's World. Goose is Martha Nell Smith, a big muckety-muck in the world of Emily Dickinson studies and digital humanities. They are a couple of fun-loving yet ornery dykes who met in grad school -- They struck up a conversation in a secretary's office in 1984 and somehow never stopped talking. They moved to Maryland together in 1986 and got Roxie when they bought a house in 1994 that came with a ridiculously large backyard. Roxie named them Moose and Goose when she figured out their radically different positions on the matter of dog training and obedience: “Moose” is short for Mussolini, and “Goose” is short for Mother Goose. No one can really explain the remarkable longevity of their partnership, but you might pick up an insight or two by reading the posts celebrating their 24th, 25th, and 26th anniversaries. Around here, Roxie usually refers to Moose and Goose collectively as "the moms" in order to mark their fundamental weirdness.

What/where is Queer the Turtle University? QTU is a not terribly clever pseudonym for the University of Maryland, the institution of public higher education in College Park, MD that employs both Moose and Goose. The university's mascot is the diamondback terrapin, a species of turtle native to the Chesapeake Bay. For a number of years, the university's slogan was "Fear the Turtle," so when Moose was named founding director of Maryland's program in Lesbian, Gay, Bisexual, and Transgender Studies, she decided its slogan would be "Queer the Turtle." Certain people on campus were not amused by her big gay parody of a trademarked phrase, but she stuck to her guns and has the bumper stickers to prove it.

Is Ishmael's, which you refer to from time to time and describe as "the seedy yet cozy bar around the corner from the global headquarters of RW Enterprises, LLC," a real bar? No, but we drink there frequently.

Who the heck is Mark Twain, and why does he occasionally pop up here? Mark Twain is a famous American writer who figured out a thing or two about irony, satire, and the fundamental goofiness of the United States. Around here, he is an inspiration and a persnickety sock puppet who directs the Office of Persona Management. He and Moose can often be found arguing about matters creative and political over drinks at Ishmael's.

Why do you use words like queer, dyke, bitch, and faggot? Don't you know how hurtful such terms are? Boy, do we! And we use them in order to deny them their power to wound. We take them back from the haters and the hurters and use them as strong, righteous names we proudly call ourselves, in the great tradition of those who have declared, "We're here, we're queer, get used to it!" and "Bitches get stuff done!" Why? Because talking back is an important part of fighting back. Because in some situations silence is not golden.

You also use odd words and neologisms, like blogalicious, wevs, and poop on toast. What's up with that? Are you trying to prove you're cool? Isn't everybody, sweet pea? We occasionally make up words and expressions when we can't find something that feels right, but usually we shamelessly borrow stuff we've seen elsewhere. For example: We think we are the ones who made up blogalicious, and we use it as a term of praise for work by bloggers whom we especially admire, while poop on toast is our handy way of describing most of what arises from today's Republican party. Wevs is short for "whatever" and is a term we picked up, along with many others, at Melissa McEwan's indispensable Shakesville. It has less to do with being cool than with embracing the fact that language is a social tool that is constantly, creatively changing.

Why don't you have a more conventional academic blog? How do you expect us to take you seriously when you write in the voice of a dog -- and a dead dog at that? Those are really good questions. I think the best answer comes from the famous theorist of queer desire, Hedwig Robinson, who said, and I quote, "You, Kant, Always Get What You Want." On the other hand, it's possible I became an academic because I realized I couldn't get tenure as a singer or a stand-up comedian, so perhaps I got what I wanted after all.