A Selection of Our Favorite Posts 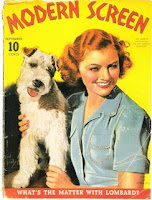 That's Asta there on the left, with Myrna Loy, who co-starred with William Powell in The Thin Man movies of the 1930s and 40s. Asta is perhaps the most famous wire-haired fox terrier in the universe. Just ahead of me, of course.

We think everything we publish here is the bee's knees, but we've put together this selection of posts we especially like on a range of subjects for the benefit of new readers trying to get a bead on what this quirky little corner of the blogosphere is all about. Good luck with that, and happy reading! Posts are listed in reverse-chronological order.

Remembering Adrienne Rich: A tribute to the great feminist and poet who gave voice to our dreams while demanding that we attend to the world "as it is  not as we wish it" to be. 4/3/12.

The Day I Became a Dog: Dogs, like people, are different from each other. In this post, the new embodied dog of Roxie's World, Ruby the rescue, unleashes her inner terrier and finds her scraggly unique voice. 9/7/11.

64 Flamingos and an Imaginary Dog: An earthquake shakes loose a meditation on love, memory, and mistaken identity. 8/25/11.

The Virtue Binge: In 2011, Moose lost more than 50 pounds by embracing what she termed a Lifestyle Adjustment Program. In this post, she reflects on the challenges of writing and talking about weight and body issues without sounding sanctimonious or engaging in fat-shaming. 8/1/11.

MLA 2011: The Great Untweeted: The most viewed and commented upon post in the history of Roxie's World, this lengthy piece considers the place of social media at a large academic convention and raises concerns about how, for example, Twitter skews coverage of such events. 1/16/11.

My Teacher, Susan Gubar: Moose pays tribute to a beloved teacher and reflects on educational opportunities put at risk in the age of budget cuts on campus. A revised version of this post was subsequently published on Inside Higher Ed (here). 4/20/10.

The Case of the Invisible Furlough: On how it came to pass that two straight years of staff and faculty furloughs caused almost no reaction at Queer the Turtle U. And the importance of bringing furloughs and other cuts into public visibility. 2/22/10.

Arranging Grief: After my death, Moose builds an electronic archive of images of me and considers the nature of grief and memory in the post-Gutenberg era. 1/11/10.

The Living End: I am dead. Mark Twain comforts a hungry, thirsty Moose at Ishmael's, the seedy yet cozy bar around the corner from global headquarters of RW Enterprises, LLC. 12/31/09.

In Praise of Peaches: The best of our several food-focused posts, in part because it elicited wonderful comments from readers sharing their own culinary histories and cookbooks that had influenced them. 8/11/09.

Roxie's Watching: Julie & Julia: The best of our film reviews and one of the most clicked upon posts ever in Roxie's World after being featured in a "Blogaround" on Shakesville. (We take a second look at the film in this follow-up post.) 8/8/09.

How Public, Like a Blog: A Photoshopped image of Emily Dickinson sporting the remarkable hat Aretha Franklin wore to Barack Obama's inauguration provides the occasion for thinking about style, anachronism, and the presence of the past in the 21st century. 1/29/09.

Hard Times: This is the post in which we coined the phrase "Excellence Without Money" to describe the impossible bind universities are in these days as they strive to maintain quality -- or a rhetoric of quality -- in the face of declining public support for higher education. 12/12/08.

Repetitive Motions: Published a few days after the 2008 election, this post grapples with the painfully mixed messages voters sent in electing the nation's first African-American president while voting down marriage equality in four states, including California. 11/10/08.

Pudd'nhead Pieties: Mark Twain and Moose discuss a controversial caricature of Barack and Michelle Obama that ran on the cover of the New Yorker and the importance of political humor in a democratic society. 7/16/08.

Hillary's Grace: We have done innumerable posts on Hillary Clinton, whose presidential candidacy we endorsed in 2008, but this one is special because the moms were standing about 20 feet away from the former first lady when she officially suspended her history-making campaign. 6/7/08.

An Open Letter to Jodie Foster: We love her -- enough to criticize her when we feel it is warranted.  This post argues that coming out is still important and was published shortly before Foster seemed finally to do so in remarks she made accepting an award in December 2007. 9/7/07.

On Seeing "Sameness": The moms do a fair amount of traveling, usually to attend professional conferences.  Sometimes they get to go to pretty cool places, which gives Moose a chance to play the role of travel writer/reporter.  Here's a sample of her efforts, from their 2007 trip to Japan. 8/8/07.

Dykes to Watch Out For: A hilarious response to a report on The O'Reilly Factor alleging that there are gangs of pink pistol-packing lesbians roaming the streets of America's cities preying on young people and raping girls. Yes, I said hilarious. 7/7/07.

Welcome to Hell: The Rev. Jerry Falwell is surprised to discover where he ends up after his sudden death in May 2007. 5/16/07.

Scarlet Women (Temporarily) Rule: Every year in March, Roxie's World succumbs to the madness of college basketball. This post explains why. 3/26/07.