There's a lively debate going on in post-derecho DC and the surrounding areas on how to make life in the national capital region a bit less like life in one of the less developed countries of the developing world when it comes to such basic accoutrements of civilization as, you know, lights and refrigeration. Is it time to consider burying power lines so they'll be less vulnerable to the extreme weather events that seem likely to occur with alarming frequency in the world brought about by our stubborn refusal to reckon with global warming? Can de-regulated, union-busting utilities like the justly maligned Pepco be expected -- or compelled -- to do a better job of getting customers back online when mass outages occur with little advance warning, as was the case with the sudden, violent storm that occurred on the sweltering evening of June 29? Or is it time to hunker down with our ukuleles and our generators and admit that we are, in this as in so many things, fundamentally screwed and on our own?

Ah, kids, modern life. The feisty old broads of Roxie's World know better than to be nostalgic for any mythical good old days, because the good old days were always already complex and flawed and unjust to whole bunches of people. Still, they are tempted from time to time to sigh that things are a bit less pleasant than they used to be. (My typist pauses here to check on which character it is in Flannery O'Connor's story "A Good Man Is Hard to Find" who declares that, "Everything is getting terrible." Turns out it is not the doomed, talkative grandmother but Red Sammy, owner of the barbecue place/filling station where the family stops for lunch before the grandmother's flawed recollection sets up their fateful rendezvous with the murderous Misfit. Everything is getting terrible. It's a useful, funny, haunting line, even if one doesn't share Red Sam or the grandmother's nostalgia for a brutally ordered past. Sometimes, even one strenuously committed to seeing the glass as half full is inclined to feel that perhaps a lot of things are getting rather terrible.)

All those complicated questions of power are, however, above my pay grade. Instead of answers or recommendations, all I have to offer are a few photos that document the devastation wrought by the derecho in the physical space of Roxie's World. They also document Pepco's failure, nearly two weeks after the storm, to clear the neighborhood of potentially dangerous debris. Here, for example, is what is left of the utility pole that was brought down by a large tree in the yard right across the street from the Moms' house. The photo was taken on Monday, but the large piece of pole is still dangling out over the street in the middle of Thursday afternoon: 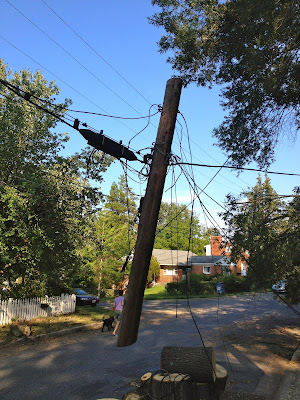 At night, that dangling remnant is just about the spookiest thing you've ever seen. And whenever the wind blows, Moose's heart skips a beat or two as her post-derecho stress disorder kicks in and she wonders what might happen if another big storm kicks up while that pole is still hanging around.

The next photo shows the two-pole solution Pepco contrived over on the Moms' side of the street after the top quarter of our pole snapped off in the storm. Workers installed a new, much taller pole right next to the old one, which still seems to have the wires for phone and cable running off of it. Moose calls this photo "Bi-Polar Disorder": 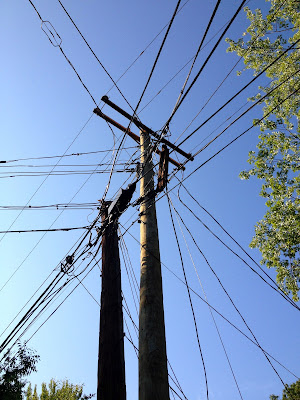 Finally, up in the next block, you see what's left of a massive tree that fell right across the road and landed on a car. These neighbors are trying to sell their property, which right now looks, as the sign says, "Impressive!" but not in a way likely to entice buyers: 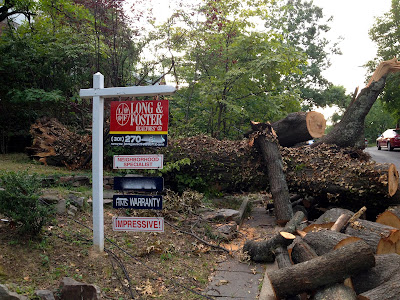 Woodcutters of the world, I invite you to Roxie's World. There's a fortune to be made in chopping up firewood for winter. The Moms promise to buy a cord or three to prepare for the power outages the next snowpocalypse will undoubtedly bring.

And, Pepco, my Pepco, is it any wonder your name is a curse word, the nasty, hilarious song on everybody's lips? No, it is no wonder at all. We'll embed the song and dedicate it to our good friend PhysioProf, who will appreciate the salty Anglo-Saxon vocabulary. Srsly, Pepco, how hard can it be, to clear a f*cking tree? Your customers long to know. Peace out, and leave the lights on, baby.