The Whole Truth, No Stretchers 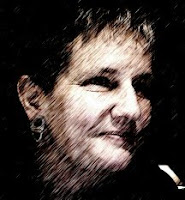 Marilee Lindemann is the woman behind the curtain in Roxie’s World. She is an associate professor of English and director of Lesbian, Gay, Bisexual, and Transgender Studies at the University of Maryland. She is the author of Willa Cather: Queering America (Columbia UP, 1999) and numerous essays on Cather, American women writers, and queer literary history. She edited The Cambridge Companion to Willa Cather (Cambridge UP, 2005) and Cather’s novels, Alexander’s Bridge (Oxford UP, 1997) and O Pioneers! (Oxford UP, 1999).

She began this blog in 2006 on a whim but soon became fascinated with the genre and the critical/creative possibilities of blogs and other social networking tools. Since 2007, she has given a series of lectures and conference papers on what blogs are, what they do, and what they can teach us about reading and writing in the 21st century. She has an article, “The Madwoman With a Laptop: Notes Toward a Literary Pre-History of Academic Fem Blogging,” in The Journal of Women’s History (22.4 [Winter 2010]): 209-19. In fall 2010, she taught a new course called “Writing for the Blogosphere.”