Paws Up for Stump! 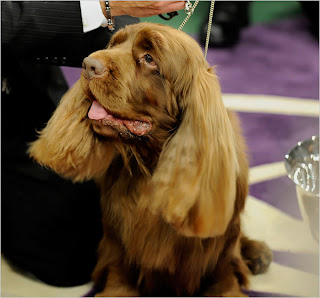 Let's hear it for the old guy! Stump, a 10-year-old Sussex spaniel, took Best in Show last night at the Westminster Kennel Club dog show at Madison Square Garden. Stump had retired from the ring four years ago with a serious but undetermined illness. That means his triumph is triply dogalicious: He is the oldest dog ever to take the top prize at Westminster, the first of his breed to do so, and an awe-inspiring medical miracle! What's not to love?

Way to go, little dude. I've got nearly five years on you, and loyal readers know that my own noble breed has picked up more Best in Show prizes at Westminster than any other breed, but I am delighted to welcome you to the winner's circle. Oh, and to Scott Sommer, Stump's handler and co-owner, who lets the old dog sleep in his bed, between the sheets, congratulations and a thorough face lick from the cranky old bitches of Roxie's World.

By the way, word is Stump won't maintain the hectic travel schedule of last year's BIS winner, the affable beagle, Uno, who visited the White House and rode a float in the Macy's Thanksgiving Day parade. Sommer told the Times, “Stump’s going to travel back to Houston and kind of stay there. He doesn’t travel that much.”

Paws up to that, Stump. Take the prize -- and then take a nap, between the sheets. You've earned it!
Posted by Roxie Smith Lindemann at 9:55 AM