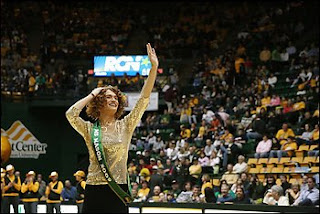 Surely it's a sign of progress that an openly gay drag queen has been elected Homecoming Queen by fellow students at George Mason University in Fairfax, Va, right? Ryan Allen won the title this past weekend after competing for it under his drag persona, Reann Ballslee. Allen grew up in a small town north of Richmond and survived years of taunting after he came out his freshman year of high school. He began performing in drag after coming to Mason in 2005 and says he entered the homecoming queen competition for fun in his senior year. Winning the title, and claiming it in a black skirt and gold sequined top before the crowd at a sold-out basketball game, clearly spelled some serious validation for Allen and, in his judgment, the institution he attends. "In the larger scheme of things, winning says so much about the university," Allen told Wa Po. "We're one of the most diverse campuses in the country, and . . . we celebrate that."

So, we salute Allen for his courage and his fellow students for voting for him. We are sufficiently invested in the royalist mode of queer subjectivities to raise our tiara to any queen with the talent and fashion sense to smack down the competition by lip-syncing Britney Spears while wearing a silver bra and zebra-print pants (which Allen did in the qualifying pageant on Feb. 9). The educators of Roxie's World are also pleased to see the ambitious young school on the other side of the Beltway sending its spokesperson out to declare that the university is "very comfortable" with a queen being selected as queen. "We're fine," Daniel Walsch assured anyone who happened to care. Of course you are, sweet pea, as long as none of your fat-cat donors decides that George Mason has gotten just a little too light in the loafers to deserve a nice big pot of conservative money. We also savor the delicious irony of a queer being named homecoming queen, given that queers from time to time find themselves tossed out of their familial homes and are generally positioned within the cultural logic of heteronormativity as what Freud termed the "unheimlich" -- the un-homelike, unfamiliar, weird, uncanny. (My typist came up with that last fancy-schmancy point. I just like the sequins.)

We like queer visibility. We're huge into the whole school spirit thing, though we thank dog every single day that the moms don't teach at a school whose colors are, like George Mason's, green and gold. The undercurrent of hesitation you may be sensing here stems mostly from the way the story is getting played in the media. "Work that tiara, boy!" snaps the too cool for its own good main header on the Wa Po story from Friday morning, while the subhead plays up a "campus divide" allegedly "sparked" by Allen's selection. (Note to headline writers: If you want to commend a drag queen for the excellence of her performance, you don't call her "boy." You call her "girl.") The contrast between the two headlines is jarring, as if the paper just couldn't decide which demographic to go for -- the hip kids who, like a young woman quoted in the story, embrace Allen as "a queen for everybody," or the old farts (of any age) just itching to launch a new battle in the culture wars. Like the white man of old movie westerns, the paper seems to speak with forked tongue, and it ends up sounding ridiculous -- as incoherent and untrustworthy as any land-grabbing cowpoke ever was. Note to newspaper industry: You are dying of wounds that are largely self-inflicted.

Meanwhile, out on the teevee, Allen's story gets played for laughs. MSNBC promotes it in the category of "weird news." Tamron Hall yuks it up with Allen, feigning disappointment that he didn't show up for his interview "all glammed up." "I hear you did this as a joke," Hall says early in the conversation, "that you really weren't trying to win. What happened here?" Allen acknowledges that he entered the competition for fun, but he goes on to suggest that for him the fun of drag is importantly connected to a strong sense of queer identity and community. He talks about having joked with friends for years about running for the position and makes it clear that the decision to do so during his senior year was a collective one: "We figured this is senior year, so we have to do it." Hall calls it a joke in order to contain the queer energy of Allen's performance, to undermine the significance of his accomplishment. In her eyes, it's a stunt, not a subversion. Allen calls it fun because it's a collective, camp assault on norms that have been used against him and his sissy friends for most of their young lives. He fights back -- and he gets to pass that tiara around to all the girls at the next house party. The joke, we hope, is on Hall.

Paws up to you, Reann Ballslee and to all the girls who helped you earn your moment in the spotlight. You've got an excellent queen wave and a smile that could stop traffic. Just be careful in that spotlight, honey. There's a fine line between being a star and playing the fool, and we don't want you to stumble in your size 12 pumps and end up on the wrong side of that line. Walk tall, little sister, but make sure you know where you are headed.
Posted by Roxie Smith Lindemann at 1:49 PM