A friend (and loyal reader) works in a flower shop. She came to dinner last night bearing a lovely flower arrangement -- her second of the week, actually (yes, we do inspire unexpected displays of excessive devotion, and we love them) -- but she also brought with her a little story from the flower shop that reminded us of why we are cynical about Valentine's Day. She reported that men occasionally come into the shop during the VD rush and place two separate orders. They pay for one with a credit card and pay for the other with cash. The cash orders, our observant friend is certain, are for their mistresses. She also notes that the cash orders are usually about half the cost of the wife's order. Yep, that's why we're cynical about Valentine's Day: Big, dumb, money-driven spectacle of manufactured emotion aimed at deflecting attention from the steaming load of lies that is heteropatriarchy. Wanna show the missus something a little closer to the truth, buddy? Forget the flowers. Take her to see Revolutionary Road for Valentine's Day. 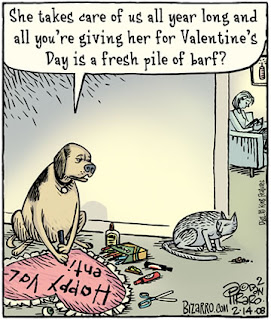 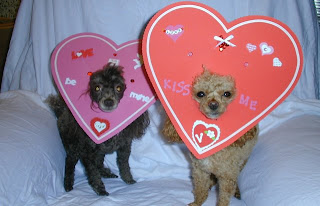 Oh, and if you're home cruising the internets on a rare Saturday night VD, then you are likely in need of some reading material to go along with that stiff drink you're nursing. Am I right? Here you go, my lonely beloveds:
My typist has to go now, because the moms are going to celebrate Valentine's Day by eating leftovers and re-watching last week's stupendous episode of Big Love before this week's stupendous episode airs tomorrow night. (Yes, after 25 years, they get to bypass the compulsory romantic dinner and do what they really want to do on Valentine's Day.) We will leave you with this heart-warming video of the greatest love song ever written by the most dynamic duo in the history of American popular music. This one goes out to everyone who had a radio in 1973, but it's especially for my brother, the Official Prep School Teacher of Roxie's World, who's got the biggest heart on earth and the worst musical taste of anyone we know, except for Moose, of course.

Sing it with us, kids, and know that your love puts us at the top of the world, always: