Read these now, or my typist will run naked through the streets screaming, "Roxie, I can't live in a world facing financial collapse, environmental catastrophe, and a whole lot less change than a lot of people were hoping for with 73 tabs open in my browser on stories we may or may not ever get around to blogging!" Please, people, save Moose's dignity and the sanctity of our happy little neighborhood. Read these stories now:

Numbers Nerd Nate Silver (of FiveThirtyEight.com) has Oscar predictions for you. We can't be bothered to make predictions this year, on account of our favorite film of the year, I've Loved You So Long (which sounds so much sexier in the original French, Il y a longtemps que je t'aime), with the sublime Kristin Scott Thomas, wasn't nominated for anything. Also, it's just way too clear that Slumdog Millionaire is going to win for proving that good guys get both money and love, while Kate Winslet will finally get the gold for playing a Nazi redeemed by literature rather than a housewife undone by an unplanned pregnancy even though Revolutionary Road is a much better, if still far from perfect, film than The Reader. We prefer a little suspense in our awards shows, which is why we'll probably bail out on Oscar at 9 p.m. Eastern to see what surprises Bill and the sister-wives have in store for us tonight.

Meanwhile, out in the real world, Secretary of State Hillary Rodham Clinton is earning raves for her first big trip abroad. Glenn Kessler's article in Friday's Wa Po on Clinton's "global listening tour" is the nicest thing we've read in the msm on a Clinton in . . . um, ever. The accompanying photo gallery is full of eye candy as flattering to Clinton as anything the devoted Clintonistas here in Roxie's World could have put together. Here's a sample, of Clinton with Special Olympics athletes at Haneda International Airport: 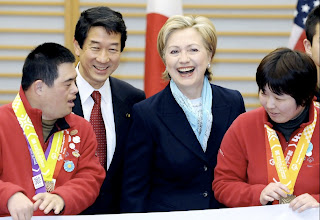 In other Clinton-related news, you have probably heard that Socks the Cat died this week. We raise a somber paw to the furry former White House resident and direct your attention to this riveting obituary (yes!) by Michael Schaeffer over at the fascinating Obit, which we stumbled across thanks to Tenured Radical. 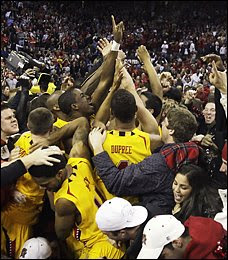 You know the moms were in the stands at Comcast yesterday when the much maligned Non-Lady Terps pulled off a stunning overtime upset (88-85) of third-ranked North Carolina. No, they didn't rush the floor with all the kids when the game was over, but they certainly understood the impulse and agreed wholeheartedly with elated Coach Gary Williams' description of the atmosphere in the arena. "That was a Cole Field House crowd," Williams said afterward, meaning the noise was thunderous and every heart in the house was pulling for the Terps to pull off the impossible feat of coming back from a 16-point second half deficit to take down the team led by national player of the year Tyler Hansbrough. Read about it here and here. (Photo Credit: Rob Carr, AP)

And of course the moms will be back at Comcast this evening for the women's much awaited rematch with rival Duke, who beat the Lady Terps by 3 points down at Cameron in January. Wa Po's Camille Powell has a heartwarming setup on the close friendship between Marissa "Shoulders" Coleman and Duke's Abby Waner, who are dreaming post-college dreams of co-anchoring a sports chat show. They're arguing over what to call the show. Personally, we like the sound of Shoulders and Shorty (Coleman is 6'1"; Waner a tiny 5'10"), but we have a hunch Waner won't want to give Coleman top billing. Bummer.

Way down deep in the bottom of the grab bag, we've got a couple of pieces on the long-neglected topic of queer aging, which we are supposed to be highlighting in preparation for somebody's fiftieth birthday at the end of March. (Hint: This Nearly Over the Hill Person recently announced that she wants an autographed picture of Shoulders to mark the occasion. This picture, but you probably already knew that, careful reader that you are.) Anyway, check out these stories on alternative senior communities if you're ready to break out of your denial about your own rapidly approaching golden years and start thinking about where and how you might want to live them. This article profiles a community in southwest Virgina that is vaguely spiritual and gender-mixed. And this one profiles a community of lesbians in Alabama who are still doing the whole matriarchal, separatist thing, dog bless them. Whatever floats your boat, womyn, but Moose got booted out of Lesbian Nation decades ago over sarcasm and other supposed vestiges of phallocentrism. She also reckons the snacks will be better if she retires someplace with a few pretty boys who can be counted on to keep their subscriptions to Gourmet current, so she and Goose will be looking for something mixed, urban, non-spiritual, self-cleaning, post-Depression affordable, and close to an ocean. Good luck with that, moms. Your goals, as always, are completely realistic.

Peace out, kids. I've got a game to get ready for. Go, Terps! Smash the Evil Empire of Duke to smithereens!
Posted by Roxie Smith Lindemann at 12:36 PM