A Moose By Any Other Name 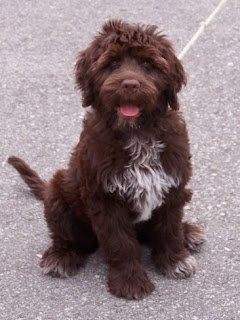 Apparently, Team Obama is still a little bitter about the fact that America's favorite dog blog devoted to politics, pop culture, and basketball never got around to endorsing the former junior senator from Illinois during his run for the White House. How else to explain this fit of pique from First Lady Michelle Obama over possible names for the dog the family is planning to adopt this spring? People magazine reports today the Obamas have finally settled on a Portuguese Water Dog, the breed favored by Senator Ted Kennedy (because, you know, the whole Camelot Once More meme just hasn't been driven into the dirt yet). Fine, we say, don't get a terrier. We've got more important things to do than be props in your slick political spectacle. We realize the whole group probably needs to be re-branded after poor Barney's association with the Shrub years. But, really, Michelle, did you have to take a swipe at my typist? What's up with that?

Here is the People report on what the First Lady of the United States had to say on the now all-important question of what the Obamas will name their dog:

"Oh, the names are really bad. I don't even want to mention it, because there are names floating around and they're bad," Mrs. Obama says with a laugh. "You listen and you go – like, I think, Frank was one of them. Frank! Moose was another one of them. Moose. I said, well, what if the dog isn't a moose? Moose. I'm like, no, come on, let's work with the names a little bit."

Reached in her office late this afternoon for comment on this obvious attack on her virtual identity, Moose was diplomatic.

"Look, Rox," she said, "everything is just so political for them. Imagine the kerfuffle that would arise among all the A-list blogger boyz who chugged so much Kool-Aid for the Precious if the Obamas were to name their pet after the typist for a dog blog that resolutely refused to endorse the guy! Besides, there is also the highly problematic issue of the origin of my nickname."

"You mean because of the whole Mussolini thing?" I replied.

"Yeah, Rox. I know that you and Goose think it's hilarious, because you have this crazy idea that I'm something of a control freak and that in this limited regard I supposedly bear a faint resemblance to an Italian dictator known for his fondness for order, but I can't see the Obamas standing up and explaining the joke to the American people. Really, I'm not sure even Sasha could pull that one off."

"You're probably right, but I still think it was mean of her to mock the name. I think Moose is a great name, for a person or a dog, despite its association with a dubious historical figure. I should think Barack Hussein Obama would be sympathetic to that problem."

"Indeed, but you know what? Let's show the Obamas that we are ready to rise above our former differences. Let's turn the other cheek on Moose-gate and try to help them solve their problem. Let's enlist your legions of loyal fans in the effort to name the Obamas' dog! I ran across a great suggestion today over on HillBuzz -- that the Obamas should get two dogs and name them Hope and Change."

"Ha! That's really funny, and it's also a wonderful idea."

So, that's it, legions. You are all tagged, every single one of you, to come up with the perfect name for the new First Dog. It has to be clean, it has to be clever, and it must be devoid of even a whiff of political incorrectness. We'd prefer that it steer clear of Kennedy allusions, too, and we'd kinda like to avoid the more obvious heroes of African-American history, but we don't want to set too many limits on your creativity. Submit your suggestions in comments and we'll forward the best ones to the White House. Oh, and the judges for this contest? Moose, of course, and maybe our good friend Frank from Norway, who is not named after any dictator that we know of and will likely never recover from the shock of seeing his perfectly fine name mocked by the First Lady of the United States. We think it's only fair that Moose and Frank should get to make this vital call.

What's in a name, kids? Put on your thinking caps and let Roxie's World know. Peace out.

(With thanks to qta and Kate for pointing us toward the People story.)
Posted by Roxie Smith Lindemann at 7:42 PM