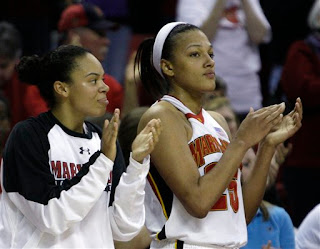 And the Oscar for best ensemble performance by a group of strong, inspired, sweaty young women goes to . . . the Lady Terps!

All you need to know about the deliriously happy ending to an orgy of basketball in College Park, MD this weekend is that Kristi Toliver and Marissa Coleman combined to score 58 points -- one point less than the entire Duke team -- en route to the Terps' 77-59 victory. After a sloppy, unfocused first half, the Maryland women stormed out in the second half and absolutely dominated the suddenly hapless Blue Devils. On the defensive end of the court, the Terps simply slammed the doors shut on the Devils, holding Coleman's BFF Abby Waner to just 5 points. Meanwhile, the offense scored seemingly at will, shooting a blistering 62.5% in the second half.

It was . . . less surprising than what happened yesterday at Comcast, but no less soul-satisfying.

It was . . . just what you want to see your favorite team on earth doing to its arch nemesis on the brink of tournament season.

And the only half-decent shot Moose was able to get all day is here: 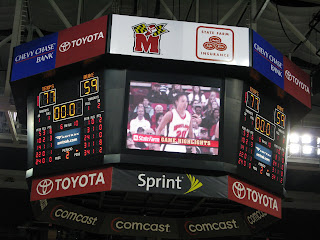