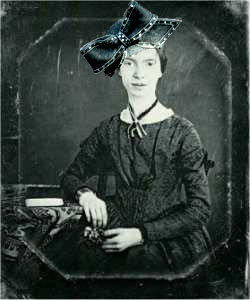 I tie my Hat — I crease my Shawl —
Life's little duties do — precisely —
As the very least
Were infinite — to me —
(Image Credit: Shannon Scott Shiflett, who also found the [perfect] lines by Dickinson)

We offer this exceptional piece of eye candy -- just one of more than 1100 images that have now been uploaded to the "Aretha Franklin's Inauguration Hat" fan page on Facebook -- as a short answer to the question, "Why do you like living in the 21st century?" It might also be an answer to a number of other fascinating questions -- e.g., "How do you justify the inordinate amount of time you spend on social networking sites or trolling the internets looking at images?" or, "What's a sure-fire way to make a couple of English profs laugh so hard they wet their pants?" -- but we'll leave it at that.

We have watched with interest and no small degree of amusement the viral spread of the spectacular hat Aretha Franklin wore for her performance at Barack Obama's inauguration. (Loyal readers may give us some credit for helping to launch the virus. We posted a picture of the hat here in Roxie's World before the inaugural parade had even made its way to the reviewing stand.) Our hunch is that the hat has captured the cultural imagination because it so deftly signifies the nation's release from the soul-deadening non-style of the Bush years -- the non-drinking, early-to-bed, rod-up-his-rear president who left no peanut-butter sandwich behind and the robotic wife whose hair didn't move in eight unbearable (to us) years. Aretha's hat -- larger than life and perched at its jaunty angle as her ample body belted out a soulful rendition of "My Country 'Tis of Thee" -- heralds our liberation and summons us to a new style with deep roots in African-American traditions of display and in something that feels just a little bit queer to us. Both are styles of excess, exaggeration, and audacity, styles that call attention to themselves as styles, as minority groups boldly call attention to themselves and their differences from the norms of Bush-league white, straight America. "We're here," such style declares. "We're queer -- and/or black -- get used to it -- or don't. Who cares?" Aretha's hat compels us to look and, having looked, we long to have or be what we see, and so the image proliferates . . . and we end up with the wheelchair-bound Dick Cheney at the inauguration in Aretha's hat (Moose's new profile photo on her FB page) and the glorious anachronism of the sole surviving daguerreotype of Emily Dickinson looking dapper rather than damaged (Goose's new profile photo on her FB page, thanks to Shannon).

And so Aretha's hat becomes a way for us to come at the deeper questions a friend has been probing lately about "your brain on the internet[s]." Part of what we love about our brain on the internets is precisely the kinds of creative engagements it makes possible -- between the present and the past, between and among persons, devices, and strangers who bump into one another in their journeys through cyberspace. Would the intensely private (according to myth) Dickinson "mind" the radical remaking of her image that Shannon has engineered and the several recontextualizations it has already undergone (its display first in the Facebook gallery, then in Goose's profile, and now in the oh so public space of this humble blog)? That hardly matters, though the official Dickinson scholar of Roxie's World, whose Dickinson has always been far more public and a whole lot funnier than the legend of the half-cracked agoraphobic poetess would have you believe, is confident that a 21st-century Dickinson would have taken readily to all the tools of self-publication we now have at our disposal. Were she alive today, instead of declaring, "I had told you I did not print," she might have sniffed to an influential editor, "Oh, honey, it's all up on my blog."

What matters, though, is that our brains on the internet expose the intense proximity of these worlds to one another. Of course they are different, and the differences matter, but there is something valuable to be gained in bringing Dickinson and Aretha (and Cheney!) into relationship and conversation. Dickinson, who declared herself "the only Kangaroo among the Beauty" nearly a century and a half ago, well understood the subversive, strategic powers of difference. She was also devastatingly insightful about the kind of tyrannical power exercised by would-be despots like Cheney. In her reading of Moses' being prevented from entering the Promised Land by a vengeful god exacting a petty punishment, Dickinson sides squarely with Moses, declaring that God deals with Moses "As Boy — should deal with lesser Boy —To prove ability." We have a hunch Dickinson would have understood why we always called the former vice president "Darth Cheney," and we bet she would have enjoyed herself immensely at the inauguration of the nation's first African-American president. "Little boys commemorating the advent of their country," is how Dickinson once described the Fourth of July in a letter to a friend. We like imagining what Dickinson might have had to say about about what feels, in our best moments, like a second and very different advent for a nation much in need of something new. We raise our hats to it -- and to Shannon, for making us laugh and giving us an excuse to wax anachronistically.

By the way, this is not at all the post we intended to write this evening. We had planned to catch up on our basketball blogging and bombard you with links to the terrific piece Sally Jenkins had in Wa Po today on Tennessee coach Pat Summitt, who is about to pick up her 1000th victory, or the disheartening piece John Feinstein had on the state of the Non-Lady Terps, who continue to find ways to lose. Or, we thought we might weigh in with something funny on the consternation in Washington over President Obama's snide remarks about how his new hometown deals with winter weather. (Note to Prez: When you're new to the 'hood, don't go on and on about how much better things were back in your old stomping grounds. It's boring, and it ticks off the locals.) Or, we thought we might get in on the ground floor of writing eulogies for the political career of Illinois Gov. Rod Blagojevich, who was convicted this evening by the state senate. As it is, we shall have to content ourselves with sending out a brief word of condolence to our loyal Illinois lurkers, who shall now have to endure a gov who thinks that being "cheerful, earnest, frank, and honest" is the way to lead a state. Ho-hum!

Anyway, that's what we meant to blog about tonight, but it didn't happen. That's your brain on the internets, kids. You may not go where you intended, but you'll almost always end up enjoying where you've been. Peace out.
Posted by Roxie Smith Lindemann at 7:15 PM