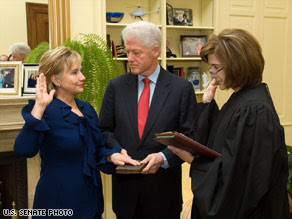 Newsflash: Guys can hold bibles and look somber and supportive while their brilliant and accomplished wives take oaths of office! The Big Dawg shows how it's done in the above photo, taken in Hillary Clinton's senate office during her swearing in as secretary of state in the administration of President Barack Obama. She was confirmed for that post this afternoon on a 94-2 vote, with Republicans David Vitter of Louisiana and Jim DeMint of South Carolina voting in the negative. We are disappointed yet not surprised that Clinton did not win the support of one of the more prominent conservatives to show up on the phone list of the DC Madam and the wing-nut who brags that he was rated by The National Journal as the most conservative senator two years in a row.

We're so pleased with Hillary's new position and so suffused by the sense of well-being that has resulted from more than 24 hours without George Bush and Darth Cheney anywhere near the executive branch that we are delighted to pass along to you this very funny bit from The Onion about Hillary allegedly mouthing along to the presidential oath yesterday at President Obama's swearing in. It is a good example of how to be funny without being mean, the line we strive continually to find here in Roxie's World. The only detail we find objectionable is the suggestion that Hillary only appeared to change the wording when it came time for the president to say his name. We feel confident in asserting that if she had been mouthing along Secretary Clinton would have corrected Chief Justice John Roberts' bungling of the word order of the oath. She'd have fixed that as quickly as we reckon she'll start fixing all the diplomatic disasters wrought by her predecessor in Foggy Bottom, but here, in any case, is the bit from The Onion:

WASHINGTON—Network news cameras covering Barack Obama's inauguration ceremony Tuesday captured Hillary Clinton silently moving her lips along with each word of the minute-long presidential oath of office. As she stood watching several yards from Chief Justice John Roberts, the former Democratic presidential candidate could be observed placing her left hand on a leather appointment book and raising her right hand slightly from her hip. Clinton, who carefully followed the swearing-in procedure with her eyes shut tightly, only varied from the president's words once, when she soundlessly mouthed her name instead of Barack Obama's. Clinton was later seen at an inaugural ball pretending she was dancing with first lady Michelle Obama.

Hey, we bet all the girls at the balls last night were pretending they were dancing with the new first lady. We're quite sure that if we had been there we would have been, even though Moose, the tallest girl in Roxie's World, has never had the experience of dancing with a woman taller than she is. We'll close with a last piece of inaugural eye candy, a photo of the First Couple dancing at the Commander-in-Chief ball, to help persuade Moose that in this new day she needs to open her mind to new possibilities. Well, she mutters from her red chair, as long as I get to wear a white tie and tails. And, you know, rule the freakin' world. 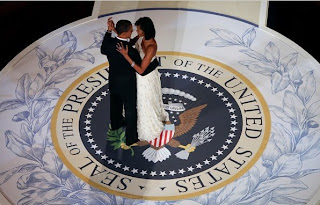