The crowd assembles on the Mall before daylight: 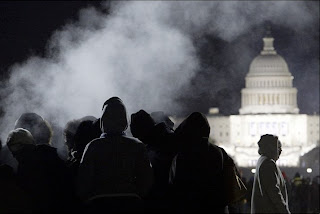 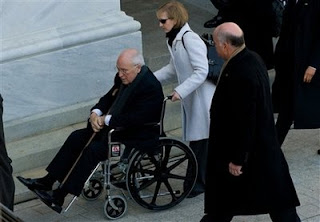 The one part of the oath that went right -- because Michelle was in charge: 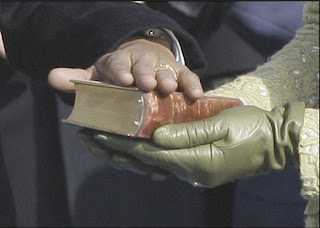 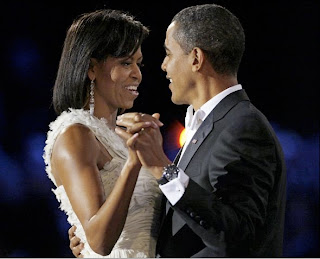 Inaugural speeches, at their best, set the tone and offer we, the people, a challenge. It is now we, the people, who must act--organizing,mobilizing to counter the forces of money and establishment power which remain obstacles to meaningful reform. Let us be the wind at the new President's back, to ensure that together we complete the unfinished work of making America a more perfect union.

It was quite a severe speech — muscular, tough-minded and unsparing (at times startlingly so) in its critique of the outgoing administration. It was a display of strength (his) and a summoning of strength (ours). Never again, I suspect, will his critics talk of the wispiness of “hope” and the emptiness of “change.” (They will talk of other things, but not this.)

Alice Walker, advising the new president on how to maintain a sense of balance and happiness in his new role:

A good model of how to "work with the enemy" internally is presented by the Dalai Lama, in his endless caretaking of his soul as he confronts the Chinese government that invaded Tibet. Because, finally, it is the soul that must be preserved, if one is to remain a credible leader. All else might be lost; but when the soul dies, the connection to Earth, to Peoples, to Animals, to Rivers, to Mountain ranges, purple and majestic, also dies. And your smile, with which we watch you do gracious battle with unjust characterizations, distortions and lies, is that expression of healthy self-worth, spirit and soul, that, kept happy and free and relaxed, can find an answering smile in all of us, lighting our way, and brightening the world.

The Idiot lately returned to his village in Texas, on history and his plan to write a book:

I want people to be able to understand what it was like in the Oval Office when I had to make some of the tough decisions that I was called upon to make. History tends to take a little time for people to remember what happened and to have an objective accounting of what took place and I’d like to be a part of making a real history of this administration come to life.

Fear not, beloveds -- The idiots and evildoers are gone, and the good guys -- and gals -- are back in charge. We survived the Shrub debacle, together. Now, let's figure out how to pick up the pieces and move forward, together.
Posted by Roxie Smith Lindemann at 10:35 PM