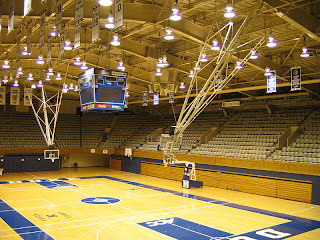 Just popping in to say that the moms and I are down in North Carolina for the big smackdown between the 5th (or 10th)-ranked Blue Devils and the 14th (or 15th)-ranked Lady Terps. Yes, kids, it's true -- They'll be venturing into the belly of the basketball beast, Cameron Indoor Stadium, accompanied by two of the Carolina Moosians, mild-mannered former Republicans who violently hate the Blue Devils because of their loyalties to a couple of other institutions of higher ed and basketball in the Tarheel State. Look for the four middle-aged people in red shirts proudly holding the hand-painted signs (Fear the Brenda! Terp Women Rule) so familiar to denizens of the Comcast Center. It's their very first road game, so the moms are of course inordinately excited. Tipoff is at 7:30. Game will be broadcast on ESPN2.

Can the Terps pull off a big win in enemy territory? Our beloved seniors, Kristi Toliver and Marissa "Shoulders" Coleman, have had some shaky moments in this young season, as they learn to play with new players, but the team was impressive in its ACC opener against Wake Forest last week. We'll just have to see what Coach B and her Mighty Women have in store for Coach P (as Duke coach Joanne P. McCallie is known) and the strong team she has assembled in her second season in Durham. Tune in, kids, and pray the Devils are kind to these travelin' Terps!

Wa Po had a nice pre-game piece this morning on junior forward Dee Liles, who has been a blast to watch this season. Dee says she's been waiting for two years to have a chance at the Blue Devils. Game on, Dee. Let's go, Terps!
Posted by Roxie Smith Lindemann at 4:59 PM