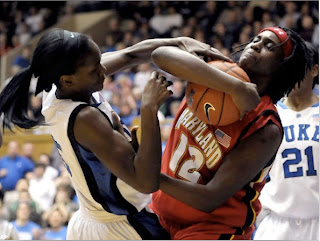 (Duke's Bridgette Mitchell and Maryland's Lynetta Kizer fight for control of the ball in the first half of their battle at Cameron Indoor Stadium, 1/12/09. Photo Credit: AP [click here, then go to the Photo Gallery].)

Coach B put it best in saying of her team's 68-65 loss last night to the Duke Blue Devils: "We look at this almost like a win. The way that the team fought and battled in the second half makes me very proud of this team."

The moms were proud and impressed with the way the Terps battled back in the second half after a frustrating first half in which Kristi Toliver was held scoreless by brilliant Duke defense. Props to freshman Lynetta Kizer, who fought like a tiger under the basket and did an excellent job of scoring when Toliver couldn't. (Toliver also did a great job of finding Kizer under the basket, but that's to be expected of the World's Greatest Point Guard.)

The Terps were without the services of guard Marah Strickland, who was ill and stayed in College Park. Maryland fans had a moment of panic when senior forward Marissa "Shoulders" Coleman fell to the hardwood and writhed in pain midway through the second half. Moose was prepared to rush to the floor and perform CPR or any other intimate and heroic life-saving gesture, but that turned out not to be necessary, as Coleman had leg cramps and merely need Gatorade and a chance to walk. Still, Shoulders, Moose wants you to know that she stands ready to do anything -- anything -- that might help you to perform at your best.

Down by 11 at the half, the Terps staged a gritty comeback in the second half that was fun to watch even if, in the end, it fell short. Toliver found her offensive groove in the second act and had Duke fans on the edges of their seats in the final minute, as she connected on a 3-pointer with 2.6 left that brought Maryland to within one. Sophomore point guard Jasmine Thomas sank two free throws for Duke that took the lead back to three. Toliver threw up a hail-Mary with less than a second on the clock that bounced off the rim, denying the Terps the chance for a sequel to their thrilling upset of Duke in the semifinals of the 2006 NCAA tournament, when a Toliver 3-pointer with six seconds left sent the game into overtime and set the stage for the young Terps' tournament triumph. Commented Toliver after last night's near miss, "I guess it's too early in the season to break the Dukies' hearts." Kristi, darling, if they had hearts, would they be Dukies? But even if they do, it is never too early to smash them into little pieces and dance upon them with your big, proud Turtle's feet!

In any event, the Blue Devils travel to College Park on Feb. 22, and we sincerely hope that Toliver and company will break their hearts then. In the meantime, we sense the team has found its rhythm and will learn the lessons that a hard-fought loss against a quality team can teach. Kizer played an awesome game but missed four free throws that might have changed the final outcome. The Terps were out-rebounded 56-39 and were particularly weak on the offensive end of the court. They still need to do a better job of figuring out what to do when a defense is smart and strong enough to contain Toliver.

Nonetheless, the season is young, and the moms thoroughly enjoyed their first road trip with the Lady Terps. As for storied Cameron Indoor Stadium, well, let's just say the high school gyms of Moose's basketball-obsessed Hoosier girlhood were every bit as impressive and quite possibly bigger. C'mon, Dukies, would it kill you to join us in the 21st century? And, really, Coach P, can you not diplomatically suggest to the band that "Devil With a Blue Dress On," tempting as it is, is really not the best song to inspire the hard-driving women of your team, who obviously rely on something other than high-heeled shoes and alligator hats to stymie their opponents? We're just sayin'.

Gotta run, kids. Time for this show to hit the highway. Peace out.

Posted by Roxie Smith Lindemann at 9:02 AM