The Audacity of Hype 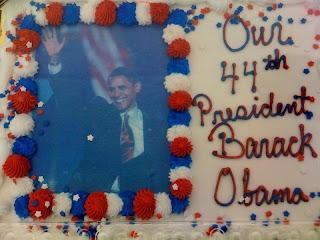 Not to be outdone by rival Safeway, which, as reported the other day by neighbor and blog pal Clio Bluestocking, is marketing Obama cookies in its Washington-area stores in advance of the Inauguration, Giant is offering sheet cakes festooned with the rarely seen visage of the nation's 44th president. Moose made this discovery this afternoon but was in a hurry and didn't happen to have her iPhone in her pocket. Realizing she risked losing an opportunity to break actual news in Roxie's World, she got into the car, phoned home, and ordered Goose to go to the store, photograph the cakes, and send her the pictures pronto. (Moose had to get to the office, kids, or qta would have felt lonely, sad, and tragically under-utilized.) Goose eagerly accepted her blogospheric mission and raced over to the store, prepared to do a full-on Emma Peel right there in the bakery aisle in order to document the madness that has overtaken the national capital area as we prepare for new neighbors at 1600 Pennsylvania Ave. We feel compelled to pass the evidence along, particularly for the benefit of those of our legions of loyal fans who live at some distance from what is starting to feel like the G-spot of the epic Obama-gasm that is about to break across our fair, apparently virgin land.

We were inspired to begin collecting such evidence by Stephen Colbert's brilliant piece last night on the indisputable fact that "Barack Obama can sell crap," featuring black Republican entrepreneur P. K. Winsome (Tim Meadows) and his amazing Obama collectibles, including a commemorative butter substitute, Obamargarine. Let us know what's for sale in your neighborhood. And let us know how you feel about these weird opportunities to ingest the body of the new president. What is the appropriate wine pairing for a big slice of Obama cake? Is it just us, or did these questions simply not arise in the Eisenhower years?

[Update: Go watch this long, detailed, ABC News report on Obama-bilia. No margarine, but pretty much everything else.]

Meanwhile, here in the reality-based community of Roxie's World, we are slashing prices on our inaugural room and board packages (originally detailed here) on news today that there are still hundreds of hotel rooms available in DC and thousands in the greater Washington area. Plus, we've added babysitting to the list of available services after hearing that swarms of high-powered moms and dads are desperate to dump the little ones somewhere so that they can join in the inaugural gang-bang -- oops! -- festivities. Fine. Here's the deal: We'll charge you five hundred bucks an hour to get your own precious Malias and Sashas and Madisons and Samuels off your hands for the night. Package includes one glass of Cold Duck in an inaugural sippy cup for kids under four, one mixed drink for kids over four if they're willing to learn to make cocktails so that Moose and Goose can get liquored up without ever leaving the couch. Bedtime is 8 p.m., unless Andrea Mitchell says something really annoying earlier in the evening that makes it impossible for Moose to refrain from dropping an F-bomb. Kids who show up wearing "World to Hillary: Save Us!" tee-shirts stay free and don't have to go to bed at all.

Wake me when it's over, boys and girls. This is just nuts, and all I really care about is what will happen to the Bush Countdown widget in my sidebar at high noon on Tuesday when at long last the clock ticks down to zero and the nation is free of the little idiot that never should have been president. Will it explode in a cloud of happy confetti? Will it be instantly replaced by an Obama Countdown to Miracles widget? I'm thinking you all should be right here in Roxie's World at noon on Tuesday so we can share that glorious moment together. After all we've been through, wouldn't that be lovely? Free Cold Duck for everybody. Dog knows we deserve it! Peace out.
Posted by Roxie Smith Lindemann at 8:33 PM