The Happy Prologue to Hillary Clinton's confirmation hearings before the Senate Foreign Relations Committee today: A new Gallup poll shows her with an approval rating of 65%, her highest rating in almost ten years. 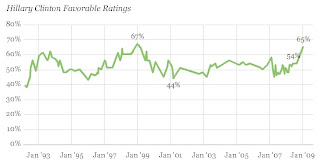 The Condensed Version of what she had to say in her opening statement and testimony: World effed-up beyond recognition, guys? Don't worry -- We'll fix it, with smart power! (Because it's Hillary, we will restrain the impulse to make a snarky joke about how "smart power" sounds like a new cleaning product, but it does, doesn't it? Transcript of her opening statement is here. ABC's Charlie Gibson and Jonathan Carl discuss Clinton's hearing here. Update: Dana Milbank has a not too snarky account of the lovefest here. Shorter version of Dem sens to HRC: We really, like, totally like you, despite the fact that we endorsed the guy who kinda stole the nom from you. Please don't make our weenies feel any smaller than they already feel. Repubs to HRC: We, like, love everything you've ever done or thought of doing or will ever do at any point in time, and we're completely faking any concern about your husband's fundraising activities because, you know, both of the people in the country who still consider themselves Republicans expect us to. Sorry. Love you -- mean it!) 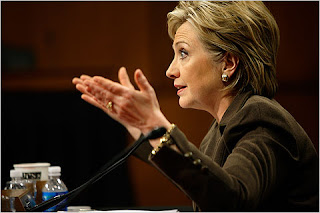 Shot of the Day? No contest: 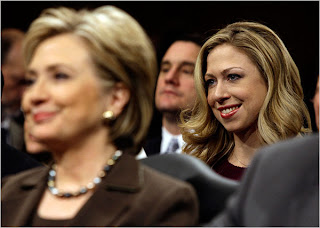 Caption as we imagine NY Times chief Clinton hater Maureen Dowd would write it: Mom will bring peace to the world -- and then I can take it over in 2016!