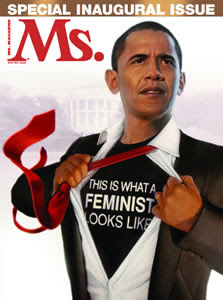 You're sure about that?

Not having any doubts?

A few maybe? I thought so.

Honeymoon's over, kids. Time to get back to the hard work of citizenship. Roxie's World joins Katha Pollitt in urging you to make your voice heard on restoring the family-planning provisions to the economic stimulus package before the final version of the bill reaches the president's desk. Do what Katha says:

You won the election, Mr. President, and you've already made a couple of important moves aimed at ending George Bush's war on women and reproductive freedom. We commend you for that, but please don't let low-income women be used as a bargaining chip in a futile effort to pick up votes from the far-right wing of a severely weakened opposition party that has no real interest in working with you. That doesn't feel like the vaunted new politics you were supposed to be bringing to Washington, Mr. President. From where we sit, it looks, feels, and smells a lot like the old politics. We'd be happy to call you a feminist -- All you have to do is man up and act like one. Don't sell out low-income women and their families your first five minutes in office.

What are you still doing here? Didn't I tell you to go make phone calls? Go call your new best friend in Washington and tell him to do the right thing. That's why you helped put him and his pretty family in that lovely house you own downtown, isn't it? Start dialing.
Posted by Roxie Smith Lindemann at 8:07 PM