The Audacity of Hype, Part Deux

We just love it when reality outstrips our capacity to make up tasteless jokes. These were spotted this morning in the deli section of the Whole Foods in Silver Spring, MD by Goose, your official Inaugural Kitsch Detective (though Clio Bluestocking continues to contribute to this extensive inside-the-Beltway effort). 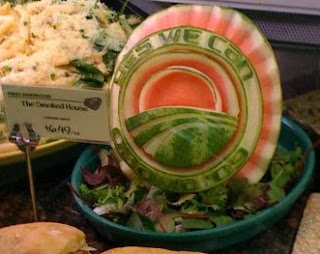 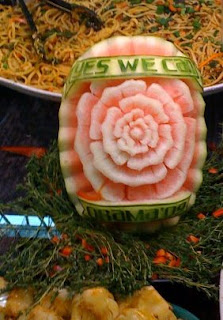 Carved watermelon -- to commemorate the inauguration of the nation's first African-American president. Does this strike anyone else as the most unintentionally hilarious joke ever produced by the color line? And are we the only ones who gaze at these images and immediately think of Camille Paglia's side-splitting cameo in Cheryl Dunye's The Watermelon Woman, in which the self-important white professor explains to the young black filmmaker that African-American critics have been wrong to view images of the mammy and of watermelon as racist tropes? Paglia goes off on an insane riff that compares the mammy to her Italian grandmothers and the watermelon to the red, green, and white of the Italian flag. She insists both are images of a nurturing fecundity that is in no way racist. The scene is so funny that it tempts Moose to overlook what a dip-stick the media-hungry Paglia is 99% of the time.

Anyway, Wa Po offers its own contribution today to the kind of unintended humor we are beginning to think may characterize the impending Obama Era. Roxanne Roberts and Krissah Thompson have a front-page story on the intense social/racial jockeying going on in elite Washington as the city prepares to welcome the Obamas. Reading the story, one imagines jaws locking all over Georgetown as frantic hostesses try to figure out how to negotiate a strikingly changed social world:

. . . for the first time, the face of ultimate power is African American. With a black first family in the White House and a diverse group of appointees and Cabinet nominees, the all-white dinner party feels all wrong. Certain hosts are suddenly grappling with a new reality: They need some black friends.

Yes, that's right, fellow citizens. The world is in the throes of economic meltdown, Israel would just as soon blow Gaza to kingdom come, and geese have found a way to bring down airplanes, but the real problem is finding an A-list black person for your next dinner party. No, darling, I told you the Powells are already booked for Saturday. I'll try the Jordans, but we may have to make do with Bill [Cohen, former def sec] and Janet [Langhart Cohen]. At least one of them is black. What kind of fork should I have Mavis set for the watermelon course?

You know what, kids? It could be that the future of humor is secure in Obamerica after all. At least it's starting to look that way from Roxie's World. We promise to let you in on all the jokes. Peace out.
Posted by Roxie Smith Lindemann at 1:38 PM