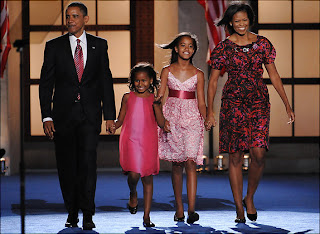 (Photo Credit: Preston Keres, Washington Post; Senator Barack Obama is joined on stage by his daughters Sasha and Malia and Michelle Obama after his speech accepting the Democratic party's nomination for president at Denver's Invesco Field, 8/28/08.)

Two questions that spring to mind upon hearing the news that John McCain has selected Alaska Governor Sarah Palin as his running mate: 1) Does anyone else think Palin sounds like the nasal-voiced character (whose name we can neither recall nor track down) on A Prairie Home Companion? We do, and now we can't stop laughing. 2) Does McCain really believe he can pick off disaffected Clinton supporters by running with a gun-toting, anti-choice Jesus freak who just happens to have a vagina? Oh, John, poor John, sweet, old, puffy-jawed John, this is not how the game of identity politics is played. Those of us who actually have vaginas are smart enough to know when some cynical pol is pandering to us. So what if Palin is a "hockey mom" with better than average hair and eyewear for a Republican? Dems offer vagina-equipped candidates whose policies and positions actually serve rather than undermine the interests of women, even if they are not, um, willing to put those candidates on the, um, ticket.

But still, watch your heads, kids -- If that glass ceiling gets any more cracks in it, it is bound to fall down pretty soon! I mean, think about it. With Palin in the mix, we are now assured of having either a woman or an African American in the executive branch for the first time in American history. And we haven't researched this, but I'm willing to bet this is also the first time we face the prospect of having either a Hawaiian or an Alaskan (though Palin was actually born in Idaho -- we did research that) in the executive branch. Finally, fellow citizens, we can smash the hegemony of the 48 contiguous states! If this election gets any more epochal and transformational, I am sure the nation's pundits will have to hospitalized. (Please, lord, let it be so.) New adjectives will have to be brought in to share the load with epochal, transformational, and post-(insert ancient relic of the bad old order here: race, gender, partisan, etc.). Are the nation's thesauruses up to the task? How many more cataclysmic changes in the zeitgeist can we be expected to endure before Wolf Blitzer and Chris Matthews simply (mercifully) explode?

And now back to what we intended to muse on before McCain's epochal, transformational announcement distracted us from our deep thoughts on yesterday's cataclysmic change in the zeitgeist:

Today's post title is brought to you by this book, a paradigm-shifting work of queer cultural analysis you should absolutely buy so that its author won't get mad at us for playing fast and loose with her brilliant title. And yet, she had to have known it was always a matter of when not if we would get around to making such a move, given our known fondness for parody as well as our fundamental laziness when it comes to coming up with titles. Besides, in this rare instance, the clever title actually has some bearing on the substance of what is on our minds as we reflect on yesterday's extraordinary events in Denver and the formal nomination of an African-American man on a major-party ticket for president of the United States.

Go back up and look at the picture at the top of this post. We could go all snarky on what transpired yesterday at Invesco Field, and we imagine some readers will be disappointed if we don't. (Sorry, Steve. Love you! Mean it!) We could join in the long line of those who are mocking the over-the-top setting and try to come up with something even more clever than "Barackopolis" or "Barackenon," but we know Dana Millbank probably couldn't get another job if we edged him out of the one he currently holds, so we'll pass on that. We could focus on the fact that we basically agreed with David Brooks' reading of the occasion, both in what he said last night on PBS and in the speech parody he published this morning. (Sorry, kids, but we do love us some parody.) Like Brooks, we thought the outdoor setting sacrificed a lot in terms of conveying the passionate intensity of an Obama speech and of his connection to his audiences. It was as if Bruce Springsteen had booked the Meadowlands and then decided to leave the E Street Band at home and do one of his somber acoustic shows. Speaker and audience seemed miles apart and on different emotional wavelengths. We could also follow Anglachel's lead and tear into the speech for its political and rhetorical incoherences.

But, gazing at this pretty picture, we don't feel moved to do any of those things, at least not right now. We want to drop the snark, put a hold on our heretofore relentless questioning of Obama's candidacy, and pause for a moment to take in the idea of this stunningly beautiful family moving into the White House. It is impossible to know what an Obama presidency might do to alter the material structures of racism in the United States, but it is easy -- and intoxicating -- to imagine how seeing this family comfortably settled into 1600 Pennsylvania Avenue would alter the social and cultural logics of race and racial privilege. Even if you deplore the mingling of church and state (which of course you must), close your eyes and imagine the White House Christmas cards and the Easter egg roll featuring the Obamas rather than the Bushes -- at long last! --, the Clintons, the Nixons, even the Kennedys. It's a simple substitution but one that looks and feels monumental in its import.

Roxie's World is sufficiently invested in a politics of visibility to want to cheer the multiple transgressions of the color line contained in this far from simple substitution in the tableau of the presidential family: the bi-racial man, the tall, strong, dark-skinned woman, and the proud little girls with the sparkling eyes and the names that are a delight to say. (The younger Obama daughter, Sasha, has become a favorite in our house this week. The moms have laughingly termed her "the rascal child" for her mischievous antics on the convention stage.) In their journey toward the White House, the Obama family and campaign are walking through the great American minefield of race, negotiating the impossible binary of sameness and difference. The candidate was excoriated a few weeks back for uttering the perfectly obvious truth that he doesn't "look like" previous occupants of the Oval Office, and so his nominating convention chose to emphasize sameness rather than difference. Michelle Obama's address to the convention used a rhetoric of resemblance clearly aimed at reassuring the audience that the change we contemplate is by no means a threatening one. She patiently explained that Barack's family, despite the "funny name" and its far-away home, was "so much like" her own family in Chicago, and that she and Barack both subscribe to the values of the "American Dream" (of course, of course) and want to pass those values along to their own children and "all children in this nation" (of course, of course). No one wants to hear the truth of difference, and so the campaign takes refuge in the comforting fiction of sameness. That, my friends, is the dream underneath the "American Dream," and that is why the "dream" so often turns into a nightmare.

Let's hope in this case it doesn't. Let's pause to wish the Obamas well on their treacherous, amazing journey under, over, and around the color line. In this respect, on this day and every day, without yet, quite endorsing his candidacy, Roxie's World is proud to declare itself Obamaniacal in its good wishes for the senator, his family, his campaign, and the country he aspires to lead.

Peace out.
Posted by Roxie Smith Lindemann at 1:32 PM