Does Your Mother Know?

ABBA-maniacs will appreciate today's Song of the Day here in Roxie's World, which goes out to Donna Brazile. Why? Well, it's not like you ever need an excuse for sending a song out to a hard-working tough girl like Donna, but sit down, take off your disco boots, and we'll tell you the back story.

Here's what Roxie's World was saying on May 30, 2008, on the eve of the meeting of the Democratic National Committee's Rules and Bylaws Committee. The meeting was convened to resolve the problem of Michigan and Florida, which had held primaries earlier than the dates set by party rules and had thus been stripped of their delegates to the convention: 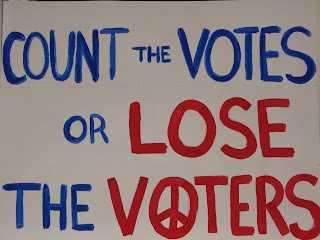 (Which, by the way, is pretty much what Hillary Clinton was saying, all the way back in January.)

And here's what RBC member, superdelegate, Obamaniac, and media whore Donna B. had to say at that meeting as she helped engineer a deal that would seat half of each state's delegates and award MI delegates to Barack Obama when his name did not even appear on the ballot in that state:

(Text of the quote is here. Vid is here, and Donna pulls out the Momma card about 2:50 into the clip.)

And now, in one of the biggest "Never Minds" the world has seen since Saturday Night Live's Emily Litella tragically disappeared from the cultural scene, Senator "Change You Can't Keep Up With" Obama has announced that Michigan and Florida should not get spanked by Momma after all. Here's the full report on the latest flip-flop from the Obama campaign from the New York Times' "The Caucus" blog:

It seems like another lifetime ago, but remember all the fuss about Michigan and Florida?

After those states held their primaries in violation of Democratic Party rules, the party cracked down on them and said their delegates would not have a voice at the national convention in Denver. Then in May, the rules committee agreed to let their delegates have half a vote each.

Now Senator Barack Obama, the party’s presumptive nominee, has asked the credentials committee to let the two states have full voting rights at the convention after all.

The request is likely to be granted since it comes from the all-but-certain nominee, who now controls the party apparatus.

The move was not unexpected. No nominee could afford to alienate the delegates, and voters, from two such important states.

Moreover, Mr. Obama had essentially promised the two states that he would seek to restore their full voting strength, as we wrote on June 2 after the rules committee restored only half a vote to each of the states’ delegates.

Why would their voting strength matter when it is clear who the nominee will be?

Because, as Senator Carl Levin, Democrat of Michigan, said at the time, party conventions do more than pick a nominee; they also begin to establish the framework for the primary calendar in the next presidential election. And Michigan, for one, has been trying for years to topple Iowa and New Hampshire from their first-in-the-nation voting perches. Having full votes at the convention will give Michigan more power to pursue that agenda.

At the same time, Mr. Obama’s “request” to restore full voting strength to Florida and Michigan is likely to cause heartburn for party officials, who have struggled to maintain some authority over the primary calendar.

By granting Mr. Obama’s request, the party will essentially be giving a green light to other states to ignore the calendar next time because there will be no consequences.

The credentials committee is to meet Aug. 24, the day before the convention begins in Denver, to determine who will be seated.

In a letter today to committee officials, Mr. Obama asked that a resolution be passed to entitle each delegate from Florida and Michigan to cast a full vote.

The party must be united in the fall, he said, adding, “To that end, Democrats in Florida and Michigan must know that they are full partners and colleagues in our historic mission to reshape Washington and lead our country in a new direction.”

The party sent back a noncommittal response noting that it had received Mr. Obama’s request.

“We deeply appreciate and value Senator Obama’s perspective on this important issue,” the Democratic National Committee said in a statement. “This matter will be the top priority for the credentials committee when we meet on August 24th. As always our goal is to ensure a fair process and a unified Democratic Party so that we can win in November.”

The status of the two states was an explosive issue throughout much of the primary season. Back then, the Obama camp was on the other side, arguing that the two states broke the rules by moving up their primaries and should be punished.

His chief rival, Senator Hillary Rodham Clinton, had received more votes in both states but Mr. Obama had taken his name off the ballot in Michigan, and neither campaigned in Florida.

Mrs. Clinton had campaigned fiercely for the delegates in Florida and Michigan to be given full voting status, hoping this would legitimize their primaries, which in turn might bolster her argument that she had won more popular votes than Mr. Obama. Still, she trailed him in delegates, which is the standard by which the nominee is chosen.

The whole subject remains a sore point with some Clinton supporters. But Mr. Obama’s letter today seems timed to try to minimize any damage, coming almost two months after Mrs. Clinton threw her support to him and after it appears unlikely that she will be his choice for vice president.

Later in the day, Mrs. Clinton urged the party to grant Mr. Obama’s request to restore full voting rights for Michigan and Florida. Here is her statement:

No word from Donna today on what her momma thinks about this latest adjustment in the rules from the Obama camp. Should we call it Change That Suits His Interests? Change That Has Us Heaving? Change That Is Making It Harder With Each Passing Day for Us to Imagine We'll Be Able to Cast a Vote for This Slippery, Hypocritical, Not-Really-Pro-Choice, Not-Really-Anti-War Candidate? Yeah, we think we'll go with that, even if my typist will complain bitterly about its length.

Meantime, just in case Donna and her momma have both changed their tunes on the importance of sticking by agreed-upon rules, we offer up another classic pop tribute to maternal wisdom from the inimitable Captain and Tennille. This one, of course, emphasizes the importance of keeping your options open, of getting what you want, of sizing up and seizing good opportunities. Sing it with us, pretty boys and broad-shouldered girls. You know Momma hates it when you don't sing along:

Update: Momma orders you to go read Bob Somerby, immediately, on the subject of the self-destructive ludicrousness of the left's insistence last week that McCain's celebrity ad and the right's caricature of Obama as arrogant and presumptuous was "all about race" when, in fact, the right has been caricaturing white Democratic candidates in exactly the same terms for decades. It's a longer, smarter version of the case we were making here the other day. He even takes up Digby's notion of dog whistles. Go. Read it. Now. I'm sure your mother taught you to listen to Momma.
Posted by Roxie Smith Lindemann at 2:57 PM