With Malice Toward None 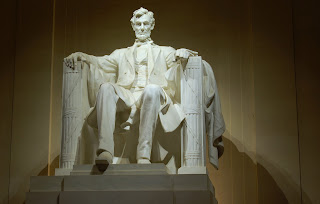 Honest Abe supplies the eye candy for this quick pre-Barack Festival post because he's the reason we missed last night's doings at the Dem convention and therefore did not post about them earlier today. The moms were out exercising one of the great privileges of living in the Washington area – taking visiting friends on a nighttime tour of the monuments downtown.

The national mall at night is a place of surpassing beauty. Everything looks and feels different. The daytime hordes long gone, you can hear the sound of your own footsteps on the marble stairs. The security folks make eye contact and smile at your pleasantries. The plainly expressed yet magisterial sorrow of the Gettysburg Address actually reaches you as you read the carvings on the walls, and you find yourself able to imagine the absent dead conjured by Lincoln's words. Moose spent several minutes with those few words last night, re-joined her friends on the stairs, and declared, "That was one helluva speech Hillary gave in Denver, but it was no Gettysburg Address." As the group made its way back to the car, Bill Clinton was launching into his own fine speech, which declared his unequivocal support for Barack Obama by reminding listeners that Republicans have a habit of arguing that Democrats are too young and inexperienced to be trusted with the keys to the Oval Office. Well done, Big Dawg. Nice tie, too.

Note to the schoolchildren who rely on Roxie's World for fine points of national history: The title to this post is a quotation not from the Gettysburg Address but from another of Lincoln's great addresses, also carved in the wall of his glorious memorial, the Second Inaugural Address, which he delivered just weeks before his assassination on April 14, 1865. We offer the allusion because it cleverly expresses our feelings in this interesting political moment as the Democratic party makes history by nominating the guy we didn't support in the primary race.

Note to the many visitors who have made their way here in the past couple of days through Google searches related to Hillary Clinton's invocation of Harriet Tubman in her (just about as good as the Gettysburg Address) speech on Tuesday: Welcome to Roxie's World. Come back and see us any time. And here's a link to a New York Times piece that consults with two Tubman scholars to try to pin down the allusion. (Turns out Clinton was kind of riffing on words that have traditionally been attributed to Tubman, but there isn't clear evidence that Tubman ever actually said them. Both scholars agree Clinton's reference was fair, though, and in keeping with the mediated histories we have of an illiterate person who left no direct account of herself.)

Note to anyone who is still mad at us for refusing, so far, to commit to voting for Obama: Melissa McEwan has a brief yet important announcement that nicely explains why we are not listening to you. It's a little civics lesson in how we elect presidents here in the United States -- i.e., not through direct popular vote but through that funny thing we all learned about in the 2000 election: the electoral college. As we noted in Comments the other day, we live in a cobalt-blue state that will vote for Obama no matter what the two cranky middle-aged broads who are the eligible voters in Roxie's World do, so go read Melissa, and, you know, take a breath. And, yes, if you live in a swing state, by all means: Vote early, vote often, and vote Democratic.

Note to the tough girls and the pretty boys who come here for little dollops of queer history and pride: Grandmother of lesbo activism, Del Martin, died yesterday at the age of 87. San Francisco Mayor Gavin Newsom, who married Martin and her partner and co-conspirator of 55 years, Phyllis Lyon, in June when California legalized same-sex marriage, ordered flags in the city to be lowered to half-staff in honor of her memory. We think that's a good idea. Flags in Roxie's World will fly at half-staff until, um, we remember to hoist them back up. Meantime, our gratitude to Del for fighting the good fight for so many years and our heart-felt condolences to Phyllis.

Okay, the Barack Festival is about to begin. We said we would listen, and we will -- and not just because Hillary told us to.

(With affection to June Star, the Man Formerly Known as Michael, and the Two Little Micks, who travel well.)
Posted by Roxie Smith Lindemann at 8:06 PM