Attention, Clio: U.S. President George W. Bush secured his place in history today by becoming the first American president to attend Olympic competition in women's beach volleyball. That's right. After a "really, really difficult" ride on the Olympic mountain bike course, the soon-to-be-former prez stopped in to watch gold medalists Misty May-Treanor and Kerri Walsh practice before they went on to win their 102nd straight match in their opening round match against Japan. In a sweat-soaked shirt, the president didn't look at all like a guy who needed to be worried about the Russian invasion of Georgia as he mugged for the cameras and tried a few bumps in the sand with May-Treanor. Wow, it's a pity Mount Rushmore is full, isn't it? 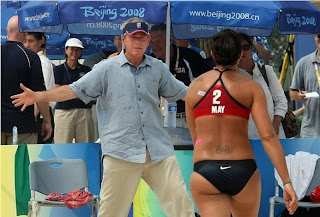 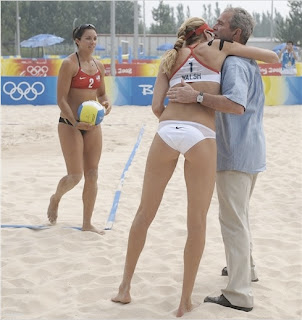 Meanwhile, Michael Phelps has won the first of his possible eight gold medals, setting a world record in the men's 400 individual medley. Sorry, kids, but the Summer Olympics make us all a little Goosebumpy, a little Moosebumpy, even a bit Roxie-bumpy. We just loves us them swimmers with their gorgeous bodies in their skimpy little suits slicing through the water with the greatest of ease. But, hey, we're not, like, the leaders of the free world or anything, so don't judge us for our profound superficiality, 'kay? Gotta go, kids -- The chicks are up on the starting blocks for the women's 400 IM!

On your marks, get set -- We're gone.
Posted by Roxie Smith Lindemann at 9:48 PM

Email ThisBlogThis!Share to TwitterShare to FacebookShare to Pinterest
Labels: Shrub