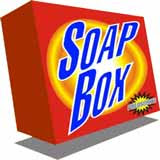 Listen up, kids. My typist has asked for the soapbox today. She has a very important message for you and something unusual for Roxie’s World: a request for action. Oh, and she’s got a tin cup in her hand, too. Have those credit cards ready! Take it away, Moose.

A Public Service Announcement from Moose

Thanks, Roxie, and thank you, legions of loyal fans, for listening.

As many of you know, Roxie’s World is physically located in Montgomery County, Maryland, a cobalt-blue paradise of lawyers, teachers, and government types just outside Washington DC. Last year, the Montgomery County Council passed a law banning discrimination in employment, housing, and public accommodations on the basis of gender identity. Similar laws are on the books in 13 states, the District, Baltimore and 90 other local jurisdictions that have banned discrimination against transgender people, according to the National Gay and Lesbian Task Force.

Unfortunately, a group calling itself Citizens for Responsible Government got 26,000 signatures on petitions in support of putting the law to a vote this November. Equality Maryland, our state’s wonderful LGBT civil rights organization, challenged the petitions in court, but a recent ruling has cleared the way for the question to go on the ballot.

Which means that now, in the midst of a presidential campaign and the battle to protect same-sex marriage in California, we’ve got one helluva fight on our hands right here in our own ridiculously large backyard. I am asking you to get involved in the fight.

Basic Rights Montgomery has been formed to educate voters on the issue and the importance of voting yes on Question C. (A “yes” vote affirms the anti-discrimination law; a “no” vote repeals it.) BRM will have to mobilize quickly to recruit volunteers and to raise the money needed to communicate with voters in the months, weeks, and days leading up to Election Day on November 4. The group is working with the blessing of Equality Maryland and with grants from the National Gay and Lesbian Task Force and the Human Rights Campaign. The goal is to identify and persuade 220,000+ Yes voters for Question C through canvassing, phone-banking, targeted mailings, and paid TV and radio spots.

All of that effort will of course require money, which is where you and I come in. For the first time in my life, I’ve agreed to help raise money (rather than just write a check) in support of a cause, because I appreciate the importance of winning this particular battle, here and now. No matter where you live (and I know Roxie has fans from sea to shining sea and around the world), you should appreciate that, too, and consider making a contribution. Why?
Join the fight. Give a little. Give a lot. Give because you hate discrimination in any form against any group. Give because you live here and want to make sure that Montgomery County lives up to its progressive reputation. Give even if you don’t live here because you are delighted to support a queer political cause that doesn’t have anything to do with marriage. If you are a disappointed Clintonista, give to Basic Rights Montgomery rather than contributing to a Democratic party that disrespected your candidate. If you are an over-the-moon Obamaniac, give to BRM knowing that your contribution will have a bigger impact on a local issue of national significance.

Give soon, because I have a Friday fundraising deadline, and those of you who know me know what a stickler I am for deadlines. (Okay, maybe not so much, but this time it matters.) And do me a favor. If you give online, shoot an e-mail to me or to Roxie to let us know so that we can thank you and get credit for the contribution. If you don’t want to give online, you can send a check directly to Basic Rights Montgomery at this address (again, please be sure to let me know):

Thanks for reading and for supporting this important cause in whatever way you can. This fight is our fight, and it’s one we have to win. Click to give, and please help spread the word to Montgomery County voters:

VOTE YES ON QUESTION C!
Posted by Roxie Smith Lindemann at 10:59 AM