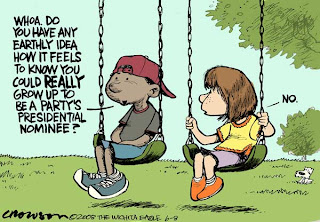 Read this, because Sean Wilentz is smarter than you are. His take-down of liberal intellectuals who "largely abdicated their responsibility to provide unblinking and rigorous analysis instead of paeans to Obama's image" should make you sit up straight no matter who you supported in the Dem primary.

Read this, because Melissa McEwan might help you understand why the selection of Joe Biden didn't exactly cause an outbreak of euphoria among Dems. Our favorite paragraph? This one, which we offer up to those who would drag us kicking and screaming to our unity ponies:

And what of those who have chanted Obama's 100% NARAL rating like a mantra? Will they reject him now that he has asked to join his ticket a man with a 36% NARAL rating in 2003 and a 75% rating in 2007? Or will they come at last to their stubborn insistence that he's still better than McCain, even though that's not the debate...?

Read this, because it's important to ponder how Obama's candidacy and possible election might alter the politics of race in this country.

And then get back to work, you procrastinator! Don't you know Labor Day is one week from today? That syllabus is not going to write itself, for heaven's sake!
Posted by Roxie Smith Lindemann at 4:04 PM