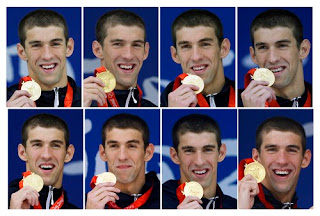 (Photo Credit: AP, via Baltimore Sun; Baltimore native Michael Phelps with each of the eight gold medals he won in the Beijing Olympics, 8/17/08.)

H/T to Baltimore Sun sports columnist Rick Maese for the phrase "Phelps Phever," which he offers in a column written with all the detachment of a high-school cheerleader shrieking praise for her boyfriend the starting quarterback. (That is not a criticism, Rick. You know we love you and are big fans of the Sun when it comes to Maryland sports. Besides, we are not exactly objective on the subject of Aquaman ourselves.) Check out the rest of the Sun's proud coverage of "the epic story of Michael Phelps' transcendent Olympics" here. Wa Po columnist Sally Jenkins offers her tribute here. We particularly like this paragraph, which nicely captures Phelps' rare combination of humility and ferocious discipline:

Phelps did not seem ambitious in any ordinary sense. He never seemed interested in becoming the all-time Olympic champion to revel in the celebrity of it. He competed less against others, than against some faint abstract outline of the possible. In fact, he seemed acutely isolated, a man with a distant stare and a heart made like a timepiece, executing perfectly aligned strokes with invariable precision, and a seemingly tactile sense of the ticking seconds.

Way to go, Michael Phelps. You got the eight gold medals. Seven new world records. The attention of the world -- presidents and NBA superstars, gossip columnists and the folks back home, many thousands of whom stayed late after a Baltimore Ravens' preseason game to watch your thrilling final swim on the giant screen at M&T Bank Stadium. We gathered 'round the plasma here in Roxie's World to see it for ourselves, and an anxious Moose pumped her fists and implored Brendan Hansen to kick it up a notch on his leg of the medley relay, as he fell into third place on the breaststroke before you dove in to churn up the water for your 100 meters of butterfly. We thank you, Michael, for letting us ride with you on what you referred to as the roller coaster of your Olympic quest. We enjoyed every move and every moment -- indeed, every one-hundredth of a moment, as your long, mighty arms gracefully yet miraculously propelled your fingertips to the wall a fraction of a second ahead of Milorad Cavic in the finals of the 100-meter fly. You delighted us, with your big ears and your goofy grins, your struggling to find words to convey the significance of your accomplishment before offering the eloquence of a modest man and a good son: "It's been such an unbelievable ride. All I want to do is go see my mom." You inspired us, as time after time we watched you thunder into overdrive to win a race in the last few meters. We were inspired by your teammates, too, of course, since three of your gold medals came in relay races that featured remarkable performances by other swimmers, including Jason Lezak's furious anchor leg of the 400-meter freestyle relay.

So, yeah, Michael, we're pretty darned impressed and have already voted you onto our very short list of Super Cool Dudes Who Momentarily Make Us Forget the Terrible Things Chlorine Does to Our Hair. (Also on the list: 41-year-old Dara Torres, who took silver in the women's 50-meter freestyle in her fifth Olympics.) We have to confess, though, that we've gotten fixated on an aspect of your story that doesn't seem to have gotten nearly enough attention in the midst of all the hoo-ha about world records and whether "greatness" in one sport is as great as greatness in another sport. We refer, of course, to the under-reported story of what fuels your greatness, literally -- i.e., to what you eat . . . and eat . . . and EAT!

Note to the Pretty Boys and Middle-Aged Girls Who Are Our Most Devoted Fans: What you are about to read may induce paroxysms of jealousy and dangerous fantasies of binge eating. Sorry, but it's our blogger's duty to tell the whole truth and nothing but the truth, with stretchers thrown in when the truth is insufficiently entertaining. Just remember: Michael Phelps spends thirty hours a week working out. Before you stuff that Ho-Ho into your mouth, stop and think about how many calories you burned in any activity you performed for thirty hours in the past week. That's right, English profs and grad students. Step away from the Ho-Ho. Now. Read on. Think of it as calisthenics for the eyes.

Here is the amazing truth: Michael Phelps consumes 12,000 calories per day -- and still has a tough time keeping weight on his 6'4" frame. You read that right: 12,000 calories per day. His day begins with a 5-egg omelet, three fried-egg sandwiches, three chocolate chip pancakes, French toast with powdered sugar, and, to top it all off, a bowl of grits. Oh, yeah, and two cups of coffee. The rest of day includes a couple pounds of pasta, an entire pizza, and thousands of calories in energy drinks. My typist slumped in her big red chair when she read that.

"Moose," I said, because I am a curious animal, "what would you eat if you had to eat 12,000 calories a day just to maintain your weight?" Her eyes went all soft and dreamy.

"Oh, Rox," she said, "wouldn't that be lovely? And since it's a fantasy, can we pretend that I would have to do this without spending thirty hours a week in the pool or the gym?"

"Absolutely, Moose! So what you would you eat?"

"Yep. Dip. Lots and lots and lots of dip. I would fulfill my cherished dream of having a vat of that crab-and-cream-cheese dip they serve at receptions over at Queer the Turtle U. all to myself. I would eat tons of it every single day and I would never be embarrassed about anyone noticing me going back for more."

"I love the idea of pancakes and fried-egg sandwiches, so I'd borrow that from Phelps, but I think I'd add some fried chicken and cream gravy into the mix, and huge bowls of mashed potatoes, of course."

"Now I think your fantasy is encroaching on Goose's."

"True, but we have similar taste in high-calorie cuisine."

"Although her 12,000 calorie diet would differ from yours in some respects."

"I suppose. She would probably skip the dips and have boxes of Godiva truffles for mid-morning and late-afternoon snacks. Washed down with several beers, of course."

"Oh, that's easy. If we were on 12,000 calorie diets, we would dine every night at Ben's Chili Bowl downtown. It's DC's high church of high-fat, low-down cuisine. I can see us tucking into their famous half-smokes and a big order of chili-cheese fries, with a big ole slice of cake (pineapple coconut for me, German chocolate for Goose) for dessert. We had food from Ben's last night when we went to see the Nationals get their butts kicked by the Colorado Rockies. The game sucked, but Goose declared the food 'nasty great.' Isn't that poetic? She has such a way with words. And wouldn't it be swell to be able to eat that way every day without gaining weight?"

"Moose! Hey, earth to Moose, come in please! Fantasy's over. Watch this video by our favorite chick reporter Wendy Reiger on what women over fifty need to do in order to reach and maintain a healthy weight."

"Shoot, Rox, do I have to? I mean, I'm guessing Wendy's plan doesn't include vast quantities of dip and spending thirty hours a week trolling the internets, does it? Besides, I'm not fifty yet!"

"Tick-tock, Moose. Fifty is right around the corner, and you've kind of slacked off on your commitment to the Tim Russert Memorial Lifestyle Adjustment Plan. Let the Olympics inspire you! Let Wendy motivate you! Let the prospect of not fitting into any of your clothes when school starts focus you!"

"Wait, Rox. You know, we could sign on with the cause of fat acceptance. There is a strong feminist argument to be made against the obsessive focus on physical perfection."

"Of course there is. You are not seeking a perfect body, Moose. You are seeking a healthy body and a reasonable balance of work and play."

"I hate the winding down of summer, Rox -- the end of Olympic swimming, the changing of the seasons, the gearing up for another school year, the inexorable passage of time as we make our sad, slow march to the grave."

"Is this about your body or your syllabus?"

"Uh-huh. Watch Wendy's vid, Moose, and then it's back to work."
Posted by Roxie Smith Lindemann at 1:15 PM

Email ThisBlogThis!Share to TwitterShare to FacebookShare to Pinterest
Labels: sports