No, You Are Not Reading The Onion 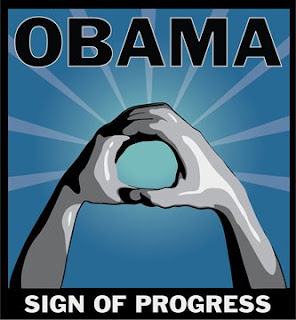 This was in Paul Bedard's "Washington Whispers," a political blog on U.S. News and World Report (picked up by way of Tennessee Guerilla Women). Dear lord, I come to you on four achy bent knees, saying, please please PLEASE tell me this is a joke. Yea, verily, I say unto you, please say it ain't (S)Obama . . . .

George Bush had his three-fingered W salute that supporters flashed when greeting him at presidential campaign events in 2000. And now, if a Los Angeles creative agency gets its way, Sen. Barack Obama will see fans meet him with his own salute like the one above. "Our goal is to see a crowd of 75,000 people at Obama's nomination speech holding their hands above their heads, fingers laced together in support of a new direction for this country, a renewed hope, and acceptance of responsibility for our future," says Rick Husong, owner of The Loyalty Inc. Husong tells me that he got the idea after seeing the famous Obama-Progress poster by artist Shepherd Fairey. "We wanted to get involved some way," he says. So, the agency came up with their own a symbol of hope and progress that also plays off Obama's name. "We thought, 'Let's try and start a movement where even while walking down the street, people would hold up the O and you would know that they were for Obama,' " says Husong. Much thought went into the relatively simple idea. "You interlace your hands in a circle, the interlacing being a symbol of different types of people coming together and the circle a symbol of unity," he says. Their design, unlike Fairey's, is free, and Husong is urging people to download it and print it on posters and T-shirts. "We want to see it everywhere, but more importantly we want this sign to take the world by storm."

Thanks so much for the thoughtful suggestion of a neat hand signal Obamaniacs can use to be instantly recognizable to themselves and others on the street. Really, though, we think the glassy eyes and the well-worn copies of The Audacity of Hype -- oops! -- Hope are more than sufficient as public signs of devotion to the Great Leader. For the time being. Once the formalities of the election are behind us, we may wish to take up your idea on a somewhat larger scale. We are thinking a constitutional amendment mandating that the O salute take the place of that ridiculous hand-over-the-heart maneuver whenever the Pledge of Allegiance is spoken may be in order. The Pledge itself will be re-written, of course, because it seems pointless to have people pledging allegiance to a republic when no one but Pat Buchanan understands what a "republic" is anymore. We are sure citizens will be much happier pledging allegiance to President Obama with their hands pointing toward heaven in a circle of unity. Brilliant idea!

We will be in touch, Mr. Husong, and we thank you in the meantime for your dedication to the One. Er, the cause.

Yours Sincerely,
Obama For the Universe -- oops! -- America

Wake me when it's over, people. This old dog needs a long, deep nap. In the meantime, you may amuse yourselves by coming up with captions for the incredibly provocative salute poster or witty alternative designs that might involve other hand gestures. Just a thought. If you come up with something really clever, perhaps we'll steal the idea and market it through our new company, Disloyalty Inc. Have at it, kids.

Posted by Roxie Smith Lindemann at 9:20 AM