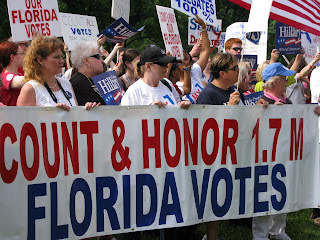 Paws up and a couple of tail wags to Donna Darko and the Red Queen for promoting Roxie's World's on-the-ground coverage of the Count Every Vote Rally today in downtown Washington. Welcome to everyone who stumbled upon our happy little corner of the blogosphere by way of their awesome pro-Hillary sites! Sorry to disappoint those of you who were expecting live-blogging from the event, but the moms are way too techno-challenged for such snazziness. We can't do much more right now than throw up some pics, because the moms are having company for dinner in a couple of hours, but we can tell you that the rally was a success in bringing attention to the issues of fairness to voters in Florida and Michigan who did nothing wrong when they went to the polls in January. The moms arrived at the Marriott Wardman Park, where the DNC Rules and Bylaws Committee was meeting, a little before 9. Crowd at the entrance to the hotel was thick. Signs were overwhelmingly focused on voters rather than candidates. The overall vibe was excellent, despite the macho zealousness of cops determined to keep the streets clear. Most Obamaniacs seem to have followed His Hopeness's order to stay away, though there were a few in the crowd. Media were everywhere. Goose was interviewed three times, while Moose roamed around playing press photog with her sleek new Canon G9. (Do let her know what you think of her work.)

Bottom Line: It was a good day for the issues and a powerful message to the Democratic party that voters are watching and waiting to see how this mess is resolved. We heard a lot of talk in the crowd from pro-Hillary voters threatening to stay home or vote McCain in November as a way of registering their outrage toward the party. Roxie's World doesn't endorse either of those moves -- yet -- but we think the party must be made to understand that unity cannot be assumed. It must be built, and it must be earned.

Wa Po coverage of the meetings and events is here. All photos by Moose. 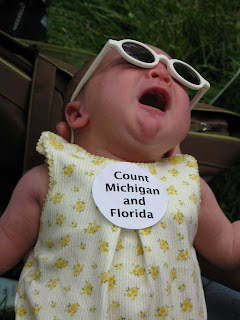 (Baby's first protest! One-month old Dana Weems Sussman-Martin puts up a cry for the voters of Michigan and Florida at her very first political rally.) 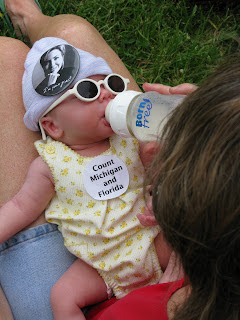 (Like many hard-core politicos, Dana finds comfort with a bottle in her mouth and a Hillary button on her head.) 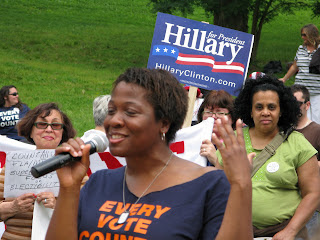 (Best eyewear spotted in the crowd at the rally.) 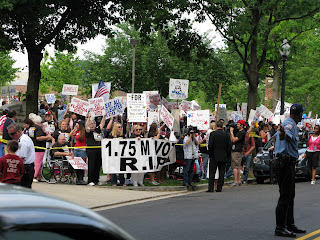 (The crowd at the hotel entrance greeting meeting attendees as they arrived.)
Posted by Roxie Smith Lindemann at 2:13 PM

Email ThisBlogThis!Share to TwitterShare to FacebookShare to Pinterest
Labels: my moms, politics