On Good and Bad Analogies 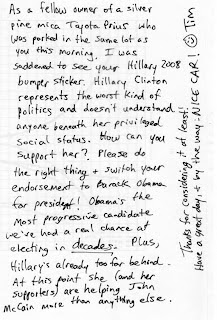 A Good Analogy: In this limited respect, Senator Barack Obama is like Jesus Christ: Some of his more devoted followers are truly, deeply obnoxious and see it as their mission to convince non-Obamaniacs that their commitment to any other candidate arises from sin, error, bad faith, racism, or failure to grasp the deep connection between the cars they drive and the votes they cast.

Case in Point? Goose came home late yesterday afternoon from a conference she had attended on campus. She held in her trembling hands the carefully written note you see above, which had been left on the windshield of the cute little Prius she and Moose bought for Christmas last year. Read the note, please, and try to help Moose and Goose understand why their devotion to Senator Hillary Clinton should be viewed as a betrayal to the cause of Prius owners everywhere -- or is it only a betrayal of owners of silver pine mica Priuses? If they had gone with the Barcelona red metallic, would Tim have felt less implicated in their bad politics and not been compelled to try to shame them out of supporting her? Moose and Goose spent hours and many glasses of wine last night trying to imagine what on dog's earth made Tim think he had the right and the obligation to leave his series of heart-felt but poorly supported assertions about Senator Obama's supposed virtues and Senator Clinton's alleged vices. By the end of the night, they were drafting their own imaginary letter to Tim in which they patiently explained that harassing fellow Prius owners did not count as a politically significant act and was not likely to be conducive to the party unity that will be essential to Democratic success in November.

Dear Tim, they thought of writing, We appreciate your taking the time to try to slap us out of our political stupidity and get us to join you in the dazzling light of hope and change, change and hope, and other super-delicious rhetorical treats. However, if we were amenable to appeals based on thin evidence ("most progressive candidate. . .in decades"), veiled threats ("helping John McCain"), and compliments to our good taste as consumers ("NICE CAR!"), we would have dumped Hillary and climbed aboard our unity ponies months ago. Instead, we continue, proudly and on the basis of solid evidence and considered judgment, to support the candidate in this extremely close race whose grasp of the issues we face and the office she seeks impresses us more with each passing day. We are in no mood to be harassed about our position by sniveling little hope-mongers who implore us to "do the right thing," when by "the right thing" they mean "our thing." Pardon us, Tim, but we think doing "the right thing" means listening carefully to the voices of nearly half of Democratic primary voters rather than trying to bully them into siding with you. We think it means realizing the party has a serious problem with Florida and Michigan that won't be resolved by condescending explanations about party rules. We think it means refraining from systematic efforts to demonize a Democratic candidate who, on the substance of policy and issues, is not a whit less progressive than her opponent. Which brings us to the next point of this post.

A Really Bad Analogy: It is in no way fair, appropriate, or politically constructive to compare Senator Clinton to Eight Belles, the filly who took second place in yesterday's Kentucky Derby, broke both of her front ankles not long after she crossed the finish line, and was euthanized right on the track at Churchill Downs. Such comparisons are not even justified by the fact that Senator Clinton herself, in Louisville on Thursday, urged supporters to put their money on the first filly to race in the Derby since 1999. And yet, sadly, inevitably, such comparisons are being made.

Case in Point? Check out the comments to Jake Tapper's report on the hard race and sudden death of the filly Clinton backed in his ABC News blog, "Political Punch." This one from an enlightened fellow named Tom is typical of the riotous good fun one can have with analogies:

Then there's this one from Greg:

It was a shame having what happened to that horse. Horrible. I wonder if Vince Foster and Ron Brown are feeding her carrots right now telling her "it's okay...you took one for the team"?

I'm telling you, kids, garbage like this makes me glad I'm not a member of your species. Sometimes I think laptops should come equipped with showers to allow users to cleanse themselves of the filth they too frequently encounter in cyberspace. Of course, many bloggers, including Jake Tapper, are condemning the coarse analogies between Clinton and the filly. Jeff Fecke has a nice piece on Eight Belles over on Shakesville that also makes this point. Sally Jenkins has a column in Wa Po this morning that raises the important questions about the ethics of horseracing and the breeding of modern thoroughbreds.

Moose and Goose were watching the Kentucky Derby live yesterday at a party they have attended almost every year since they moved to Maryland in 1986. They were also watching the 2006 Preakness when the magnificent Barbaro fell to the ground with the injury whose complications would kill him eight months later. When Eight Belles went down, they saw not an analogy but a tragedy -- and possibly their last horse race. Moose shook her head sadly when they got home from the party. "I was born in that town (Louisville), Rox, and I've watched the Derby all my life, but I don't know. There are just some things you can't risk seeing, not when you've seen them before. The wholly unnecessary death of all that beauty and all that power in a spectacle designed for gambling and entertainment? I don't think so, Rox. I just don't think so." She looked deep into my eyes, which are cloudy and red right now from a nasty infection. I looked back at her. Sometimes, I think Moose wishes she weren't a member of your species either. 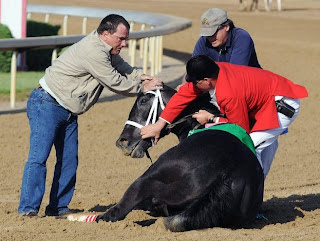 (Photo Credit: Brian Bohannon, Associated Press; Eight Belles on the track at Churchill Downs after her catastrophic injury in the Kentucky Derby, 5/3/08)
Posted by Roxie Smith Lindemann at 1:37 PM