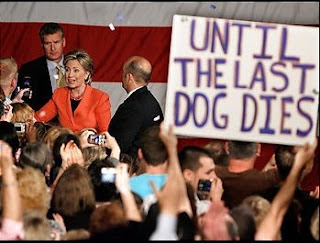 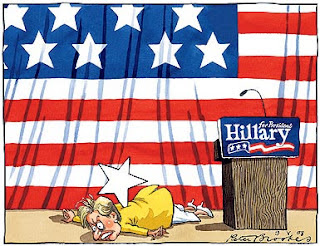 (From The Times of London, by way of Mark Simpson, with thanks to the blogger formerly known as qta)

Had enough? Apparently, some Clintonistas have. There's a movement afoot among pro-Hillary bloggers and others to girl-cott Barack Obama, to stand up and say, We won't vote for him no matter what, because we're sick of his condescension (toward women and workers), of the Democratic party's limp-membered inaction on the debacles of FL and MI, of the rank displays of media misogyny and the grand delusion that the Precious has been anointed by god, history, and the American people to save us from. . .all the icky stuff we just need to transcend, because transcendence is so much prettier than . . . politics and work and conflict over deep-seated inequalities and differences. Boring. Old-style Washington politics. Close your eyes now, children, and just believe in . . . His Hopeness. He will take us higher.

So, it's out there, this idea that we should abandon ship -- vote for McCain, not vote, protest at the convention, pour vats of menstrual blood on Howard Dean's desk -- and Roxie's World is in a dither. Some of us will never abandon the Dems, and some of us don't have any menstrual blood left to give to the cause, but all of us are near the end of our ropes over the idiocies of this campaign. We can't believe how clueless Dems seem to be, how arrogant they are in their assumption that Clinton voters will fall into line, as good girls have always done, and support the party that sold their candidate down the river for the sake of a man with a pretty voice and a thin resume.

Sometimes late at night here in Roxie's World, when we're drunk and bitter, we play a game we call Substitution. Imagine, we say to ourselves, that Keith Olbermann had said of Barack Obama that what is needed is "Somebody who can take [him] into a room and only [one] comes out." Imagine that instead of saying, "Hold on one second, sweetie," as Obama said to a woman reporter, someone had said apropos of him, "Hold on one second, boy," or "negro." Imagine how those words would sound to contemporary ears trained in racial political correctness. Not all of us have lost our sense of gender-fairness or appropriateness. When a man smirks and calls a woman "sweetie," we still hear an effort to demean women and marginalize their concerns. We hear the voices of men who counseled patience as they explained to women they would have to wait to gain the right to vote after the Civil War.

Substitution is a nasty game. We don't like playing it. We are Democrats because we don't believe we should have to play it. We believe that rights are inalienable and infinite and that we gain more by acting together for the rights of all than we could ever hope to gain by acting separately.

And yet . . . and yet . . . we are not sweeties. We do not iron your shirts. We do not cross our legs and wait for you to tell us it is our turn to run the world. We are not waiting for your approval or permission. Stab us in the back with a star or a knife, and we will turn, pull it out, and throw it right back at you. We are strong, we are ready, and nearly 17 million of us have voted for the girl. Do not fuck with us, fellas. This is not our first time at the rodeo.
Posted by Roxie Smith Lindemann at 9:36 PM