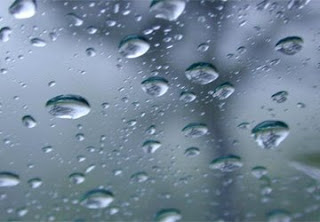 (Photo Credit: Random search of internets on "rain + windows." Found it here, but don't know where it's from originally.)

Curl up and do some more reading on the state of the Dem race, while my typist takes care of business on campus today. Feel sorry for her, please. The Learning Outcomes Assessment assignment she was so relieved to have finished yesterday turns out not to be finished after all. Special note to Historiann: Here is a topic for your next think piece on what's destroying higher education in America -- Death by Data: LOA and the Collapse of Freedom, Thought, and Creativity on Campus. Discuss.

Meantime, let your reading match your mood. Roxie's World is here to help you find what you're looking for, particularly if you are a Clintonista still trying to figure out what to feel, think, or do:
Have a swell day, kids. If you're in the east, don't forget your umbrellas. And be grateful that (at least most of) you don't have to go outside to tinkle.

Evening Update: The rain has subsided for the moment, but Roxie's World still looks and feels like the inside of a cloud. Several must-reads from this morning's New York Times to add to this morning's set of links. Check out the editorial affirming Senator Clinton's right to stay in the race. We disagree with some of the finger-wagging about her supposedly negative tactics and the insistence that she drop the fight for Michigan and Florida, but we appreciate the recognition of her right to hang in. Paul Krugman has some good advice for those worried about how to heal divisions among Dems. Among the suggestions?

More tirades from Obama supporters against Mrs. Clinton are not the answer — they will only further alienate her grass-roots supporters, many of whom feel that she received a raw deal.

Nor is it helpful to insult the groups that supported Mrs. Clinton, either by suggesting that racism was their only motivation or by minimizing their importance.

After the Pennsylvania primary, David Axelrod, Mr. Obama’s campaign manager, airily dismissed concerns about working-class whites, saying that they have “gone to the Republican nominee for many elections.” On Tuesday night, Donna Brazile, the Democratic strategist, declared that “we don’t have to just rely on white blue-collar voters and Hispanics.” That sort of thing has to stop.

One thing the Democrats definitely need to do is give delegates from Florida and Michigan — representatives of citizens who voted in good faith, and whose support the party may well need this November — seats at the convention.

Um, Paul -- How 'bout explaining that last point to the guys over on the editorial page, huh?

Lastly, you must read Susan Faludi's marvelous examination of how Hillary's more pugilistic campaign style (derided as negative by, again, the NYT editorial page) has succeeded in bringing male voters to her side. It answers the knee-jerk, classist charges of racism and, importantly, finally finds a way to use Thelma and Louise as a way to explain Hillary's persistence. There's just no stopping a woman who realizes that, "Something's crossed over in me. I can't go back." Amen, sister. Onward -- to the edge of the world!
Posted by Roxie Smith Lindemann at 8:34 AM