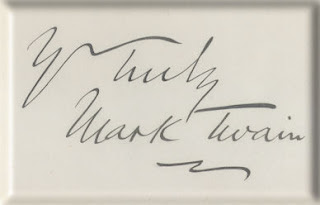 From the desk drawer of Mark Twain, director of the Office of Persona Management for Roxie’s World:

"I wish I owned half of that dog."

"Because I would kill my half."

The group searched his face with curiosity, with anxiety even, but found no light there, no expression that they could read. They fell away from him as from something uncanny, and went into privacy to discuss him. One said:

"Said he wished he owned half of the dog, the idiot," said a third. "What did he reckon would become of the other half if he killed his half? Do you reckon he thought it would live?"

"Why, he must have thought it, unless he IS the downrightest fool in the world; because if he hadn't thought it, he would have wanted to own the whole dog, knowing that if he killed his half and the other half died, he would be responsible for that half just the same as if he had killed that half instead of his own. Don't it look that way to you, gents?"

"No, he couldn't either; he couldn't and not be responsible if the other end died, which it would. In my opinion that man ain't in his right mind."

"In my opinion he hain't got any mind."

"Yes, sir, he's a dam fool. That's the way I put him up," said No. 5. "Anybody can think different that wants to, but those are my sentiments."

Mr. Wilson stood elected. The incident was told all over the town, and gravely discussed by everybody. Within a week he had lost his first name; Pudd'nhead took its place. In time he came to be liked, and well liked too; but by that time the nickname had got well stuck on, and it stayed. That first day's verdict made him a fool, and he was not able to get it set aside, or even modified. The nickname soon ceased to carry any harsh or unfriendly feeling with it, but it held its place, and was to continue to hold its place for twenty long years.

Under normal circumstances, Roxie’s World would not look kindly on a joke that imagines the death of even half a dog, but we know Mark means no harm, and, besides, our irony meters are working well enough to realize that the joke is funny. It is also pertinent to the current situation facing the Democratic party, which we do hereby officially declare the Pudd’nhead Party because:

Democrats seem determined to kill the half a dog of primary participants who have voted for Senator Hillary Rodham Clinton, as if doing so will have no effect on the health and electoral prospects of the other half of the dog that might be said to belong to Senator Barack Obama.

How do you kill half a dog? Oh, let us count the ways.
A party that does all of these things – and others, so many others that we’ve grown tired of counting – and still expects to cruise happily to victory in November is a party in the grips of the delusion that half a dog is better than none. And that, my beloved, non-Pudd’nheaded friends, is why Roxie’s World has made a decision and why we call upon our DC-area fans to join us in northwest Washington on Saturday morning to stand up for the principle that it will take a whole, un-dead dog to win back the White House.

That’s right. The moms will get up bright and early on Saturday and join with a righteous band of mad-as-hell Dems who will gather at the Marriott Wardman Park Hotel to let the Rules Committee of the Democratic National Committee know that they are closely watching and care passionately about how the party plans to address the FL/MI debacles. The demo is not affiliated with the Clinton campaign, and if you come you should show your support not for a candidate but for the principle of fairness to the voters of Florida and Michigan, who broke no rules when they cast their votes back in January. Moose will carry a sign calling on the party to count the vote of her sister in Michigan, who pulled the lever for “uncommitted” because she was an Edwardian back then. (She’s a Clintonista now, like all the other female Moosians as well as the vast majority of Goosians.) Goose will probably carry a sign that re-purposes one of the slogans the moms used during the original Florida election debacle of 2000: “No Fuzzy Math” was one favorite; “Democracy Counts” is another that still seems apt.

Details on the demo are here. Plans call for gathering at 7 a.m., but we’re guessing you could show up later and still have an impact. The meetings go until 4, so media will probably be around all day. The Hill reported yesterday that the Obama campaign was encouraging supporters not to attend, which might help to keep the event from turning into an ugly confrontation between warring camps of Obamaniacs and Clintonistas. We hope the Obamaniacs will listen to His Hopeness and stay away, if only to reduce the chance that the media will find some opportunity to broadcast sensationalized images of Democratic in-fighting.

To those who say we could further reduce those chances by staying home ourselves, we respectfully say, thanks, but some risks are worth taking. We are among the more than 17 million citizens who have cast votes for Senator Clinton during this long, hard campaign, and we want to let the Democratic party know that we and our concerns cannot be taken for granted. Our support for the eventual nominee cannot be assumed; it must be earned – by treating voters fairly and extending to Senator Clinton the respect she deserves for having waged an honorable and history-making campaign. So far, a sizable number of us do not feel that either of these conditions has been met. Others of us have grave reservations about Senator Obama’s candidacy and urge the party to realize that the primary campaign is ending in a functional tie and that its job is to select the nominee who stands the best chance of defeating John McCain in the fall. We are not Pudd’nheads, and we will not stand idly by while the party we have supported for our entire political lives abandons key constituencies, core principles, and values we hold dear.

We are not Pudd’nheads, and we won’t support a Pudd’nhead party or a Pudd’nhead nominee who thinks he can kill half a dog and snuggle up in an Oval Office chair with the other half. In Roxie’s World, we like our dogs whole and alive. See you Saturday morning in northwest DC. Look for the ornery bitches in the sensible shoes. Holding neatly painted, clever signs.