Leave It to the Moosians 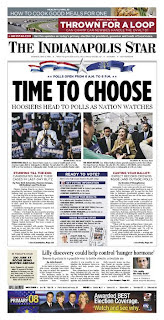 The Mother of All Moosians announced in an e-mail this morning that she, a lifelong registered Republican, will cross over and vote Democratic in today's (open) primary in Indiana at the request of one of her children. She is threatening to wear a disguise to the polls that will include a black wig and red patent leather spike heels. Moose just hopes she can read the ballot through her fake eyelashes. Moose also notes that her message gives no indication of which of the two candidates for anti-Christ -- oops, president -- will get her vote, but she's guessing her mom will go for the girl, because the Mother of All Moosians has broken a glass ceiling or two in her day and has a healthy appreciation for broads with brains, grit, and an endless supply of wrinkle-free pantsuits. Go, Mom!

Meanwhile, down in North Carolina, the newest Democrat among the Moosians heads to the polls to see if she can wrest the Tar Heel State from the grasp of the Precious. Just remember, Big Sissy: A single-digit win for Obama will be a victory for Clinton. Now that you're a Dem, you've got to master a whole new set of talking points, but you're a smart girl, too. We know you can do it.

Indy Star's endorsement of Clinton in the primary is here.

Indy Star's editorial on how cool and incredible it is that the state actually matters in a primary race is here.

Hoosier and Dem political operative Ron Klain has a thoughtful piece on how appropriate it is that the state that calls itself "the crossroads of America" should be playing such a pivotal in the battle between Clinton and Obama here.

Latest RCP averages give Clinton the edge in Indiana and Obama in North Carolina.

Video of one of the worst pop songs ever, which demonstrates Indiana's vital place in the cultural imagination, is here. We'd embed it, but Goose would die from embarrassment. The Official Prep School Teacher of Roxie's World, however, is probably already humming along.

Posted by Roxie Smith Lindemann at 9:46 AM