Let Me Sleep On It 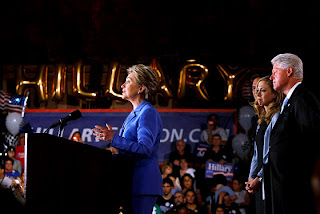 Oh, children. I feel you out there. I know you are waiting -- feverishly, breathlessly -- for Roxie's World to weigh in on the crucial question of what Hillary Clinton should do now. Despite the best efforts of Moosians in both states, Clinton barely eked out a victory in Indiana and lost substantially in North Carolina as you know all too well by now. We realize, though the Obamaniacs think we Clintonistas are mathematically challenged (being girls and all), that it is at this point impossible for Clinton to overcome Obama's lead in either the popular vote or the pledged delegates. We would like to point out, however, that an insurmountable lead is not the same thing as a large lead. The latest RCP popular vote spread between Obama and Clinton, even without Florida and Michigan (which Obamaniacs have apparently decided are in another country) is just 2.3%. Bring those two densely populated swing states back into the mix, and the spread is just 0.25%. Even if Hillary were to drop out tomorrow, which we don't expect her to do, the Precious wouldn't exactly take this thing in a landslide, unless you define "landslide" in the terms of Bush/Rove 2000: We won, narrowly and dubiously, by disenfranchising voters who weren't on our side, but, hey, a win's a win.

Note to Obamaniacs: Comments filled with long-winded, condescending explanations of party rules and Obama(th) will be deleted. We are sick and bloody tired of hearing you recite your little talking points about how the state parties violated the rules and the candidates had agreed not to compete in Florida and Michigan. Moose sits in her red chair and mutters that she doesn't give a rat's ass about a bunch of party apparatchiks trapped in a pissing contest over rules and dates and the sacred place of Iowa and New Hampshire on the political calendar. The bottom line is that 2.3 million Democratic votes have been discarded in this process, and we can't figure out why the "Count Every Vote" party is suddenly sounding so much like the party that denies elderly nuns the right to vote because they don't bring identification to the polls. Nuns, people -- Is that where we're headed?

Believe us, darlings, we want to rise with you to the highest levels of high dudgeon and political frustration, but the truth is we need some time to rest up, sort it all out, catch our breaths. The dirty little secret is that at the moment we are a house divided. Goose went downtown this afternoon for an estrogen-fueled Clinton chick trifecta event featuring Hillary, Chelsea, and Clinton mom Dorothy Rodham and still feels there's a fight left to wage. Moose was at the office, feeling surly about an overdue Learning Outcomes Assessment assignment she will have to take care of tomorrow and worrying that the whole gas-tax pander was a major miscalculation on Clinton's part. I'm feeling better, thanks for asking, because three days of antibiotics have taken the edge off my eye infection, but I'm beginning to think it may be time for Clinton and Obama to sit down and broker some kind of deal that will make it possible for everyone to get up on their unity ponies and ride, ride, ride happily toward a Dem victory in November.

2nd Note to Obamaniancs: That whole unity pony thing? It ain't happening unless you all step back from the Hillary hatred and the whole crock of crap about how your guy is the second coming of Che Guevara. Here me again, people: Barack Obama is a centrist Democrat. His health-care proposal will never get us to universal coverage. His opposition to the Iraq war when he was an Illinois state senator was just about as courageous as Moose and Goose heading downtown with their sweet little hand-painted signs declaring, "No blood for oil!" Once he was in the U. S. Senate, he voted to fund the Iraq war and was AWOL on the Kyl-Leiberman vote regarding Iran. Your super-hero guy cannot win in November without the voters (women, workers, Latinos) our evil, pandering, ambitious bitch has been winning throughout the primary season. Cannot. Win. Do you get that, or are you so caught up in the fever of your Obamania that you genuinely believe you can knock off the war hero with more than 20 years in the senate without the broadest possible coalition of left-of-center voters? Do you not get how close a lot of us are to saying, "Good luck with that, kids. You got this far without us, and your contempt for us is palpable. Let's see how much further you can go all by your politically perfect, arrogant selves."

Flame us if you dare. Our pride is wounded, and this race is as close as two ticks on a Texas prairie dog. If we want to win this thing, we have to figure out a way to win it together. That's your homework assignment, class. Comments are due by noon on Friday.

Peace out.
Posted by Roxie Smith Lindemann at 9:46 PM