Funeral For Half a Dog 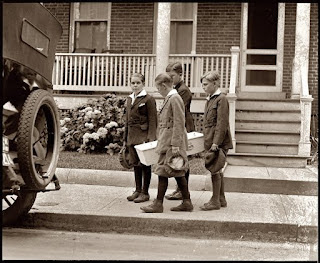 A Message from Mark Twain, Director of the Office of Persona Management, Roxie’s World:

Friends, we gather today in Roxie’s World to mourn the half a dog that was ritually murdered yesterday at the meeting of the Democratic Party’s Rules and Bylaws Committee. (Don’t get the allusion to killing half a dog? Read this, and consider curling up with this.) The committee met to try to resolve the debacles of Florida and Michigan created when those states violated party rules by moving their primaries ahead on the calendar. In a not unexpected move, the committee voted to seat all the delegates from Florida at the party convention but to allow them only half a vote each. The Michigan issue was thornier because Senator Barack Obama had, by his own choice, removed himself from the ballot. Hillary Clinton kept her name on the ballot and won the state by a margin of 55% to 40% over “Uncommitted,” a slate that at that time included Obama, John Edwards, and other Dems still in the race. The committee’s murderous solution to the problem of how to apportion Michigan’s delegates was to split them between Clinton and Obama in such a way that Clinton lost four delegates she would have won on the basis of the popular vote results. Obama is functionally equated to “Uncommitted” and picks up delegates on the basis of votes that clearly were not intended for him.

(For details and analysis on the meeting, go here, here, and here.)

One of the mourners here today is Moose’s sister from Michigan, a loyal Democrat who cast a vote for “Uncommitted” in January because she was at that point an Edwards supporter. Yesterday, when the Rules and Bylaws Committee conducted its bizarre exercise in voter-cide and mind-reading, she was a Hillary Clinton supporter. She is no fan of the Precious and would never have chosen him over Clinton in a two-person race. Today, she is so devastated by the committee’s arbitrary act of theft and disenfranchisement that she is considering voting for perennial candidate and certified nutbar Lyndon LaRouche, whose supporters were at the Count Every Vote rally yesterday with banners pointing out that the DNC’s half-vote solution is less generous than the 3/5s of a person formula once used to count slaves as a portion of the U. S. population.

Actually, we don’t know what Moose’s sister is thinking right now because we haven’t spoken to her this weekend, but at least our fantasy of her political intentions is of less consequence than the equally fantastical decision of the Rules and Bylaws Committee. The committee believes it was acting in the interest of party unity and with the goal of placating voters and state-party organizations in two populous states Dems will need in the fall. The mourners here in Roxie’s World and in other pro-Clinton pockets of the blogosphere have a different view and see a different set of likely consequences arising from the Michigan compromise in particular. Goose sees it as a last-ditch effort to drive a stake through the heart of the Clinton campaign on the part of a national party organization that has been determined to thwart her path to the nomination from the beginning. Given Obama’s lead in the overall delegate count, she sees the taking away of four Clinton delegates as a mean-spirited act aimed at propping up a nomination she views as fatally weak.

Two other mourners with us today are a couple of our favorite pro-Hillary bloggers, Tom (blogalicious) Watson and (smart as she is prolific) Anglachel, both of whom worry about the dangerous precedent set by the committee’s reassignment of delegates and the taint of illegitimacy that will attach to any nomination that arises from it. Watson writes:

Can you imagine the effects of this precedent? If you can conjure Leonid Brezhnev sitting in at a Kremlin committee table calmly adjusting the returns from, say, Belarus, then the specter of future "Democrats" engaging in a bit of electoral nip and tuck in New Jersey or Colorado or Wisconsin comes all too uneasily to mind.

The shadow of illegitimacy will now linger on this nomination. Senator Clinton may well take the Michigan appeal to the rules committee on the convention floor, and she will be well within her rights to do so. In my view, Senator Obama should join her challenge of this travesty - and place his name on the record as opposing invented votes and fake elections. If he does not, then he is all but endorsing future "adjustments" of the electoral results. Further, he would guarantee the indelibility of the Michigan* Asterisk on his nomination, on his presidency, and on his legacy - and on his beloved party as well.

Anglachel sees some good news for Clinton in yesterday’s actions, most importantly in that the seating of delegations from Florida and Michigan will likely make her the undisputed popular-vote winner of the primary campaign. However, she, too, is troubled by the procedural irregularity of re-assigning delegates, a move she believes plays right into GOP hands:

The reason I am concerned about the battle over the four Michigan delegate votes is because there is no valid procedure for that reallocation, and alleged Democrat "vote fixing" is one of the Republicans' standard arguments against the Democrats. It is used to push through restrictive voter ID and onerous voter registration rules, and it is used as an excuse to purge voter rolls and install thugs at voting places to "discourage voter fraud". It is used deliberately to undermine minority voting in Democratic districts, and the Republicans will gleefully seize on this one very egregious act of disenfranchisement to serve up a toxic mix of racism - see what happens when "those people" (i.e., non-whites, in this case AAs, but also applied to Hispanics and Asians) start calling the voting shots? They just rearrange things to promote one of "their own kind."

Why is this a really bad thing in the current election cycle? Because the new issue on the Republicans' radar is Affirmative Action. (Gee, I wonder why they picked that theme?) There will be state measures on the ballot in Colorado, Nebraska and Missouri, just to name a few states where Obama is allegedly competitive. Add this crude and blatant vote manipulation to the mix, and the Republicans now have a big campaign issue handed to them on a silver platter.

"What did he reckon would become of the other half if he killed his half [of the dog]? Do you reckon he thought it would live?" Did we really expect the Rules and Bylaws Committee to rescind the punishments meted out to Florida and Michigan and give the states’ delegates full voting privileges at the convention? Truthfully, no, but we also didn’t expect the committee to go out of its way to slap Senator Clinton and her supporters on the face en route to the coronation of a nominee so weak he needs to take votes where none existed. And, yes, Obamaniacs, before you point it out, we are well aware that many of Senator Clinton’s supporters on the committee voted for the Michigan compromise – if only to spare her and fellow Democrats the even more dubious result of having the Michigan delegates split equally between her and Obama.

What troubles us in the tortured denouement of this extraordinary primary battle is that the Democratic Party seems more interested in short-term political expediency than in demonstrating a commitment to basic principles of enfranchisement and the sanctity of the vote. Further, party leaders and the Obama campaign continue to seem oblivious to the steep challenge they face in trying to convince Clinton supporters that their candidate has been treated fairly and respectfully, that the issues she brought to the fore will receive their due if she is not the nominee, and that Obama has the experience, skill, and wisdom to be a good president. With or without those four delegates from Michigan, Senator Obama will in all likelihood end up with the nomination, but he isn’t likely to end up with the presidency without strong support from Senator Clinton’s voters, so this last gratuitous slam seems especially unwise.

That’s the problem with killing half a dog, you see. You end up missing either a brain or a bottom, and it turns out both are essential to a fully functioning dog. Believe me, here in Roxie's World, we are firmly committed to the principle that half -- or even 3/5s -- of a dog is really no dog at all.