I had been hungry, all the Years --
My Noon had Come -- to dine --
I trembling drew the Table near --
And touched the Curious Wine --
--Emily Dickinson 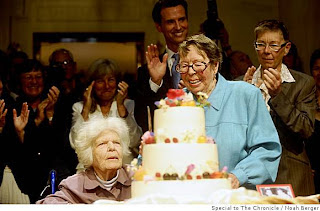 That crunching noise you heard early yesterday evening was the sound of Western civilization crumbling, as the first legal same-sex marriage was performed in the great state of California by love radical San Francisco Mayor Gavin Newsom. The first happy couple to tie the knot was, appropriately, Del Martin and Phyllis Lyon, lesbo activists and a couple since the 1950s, 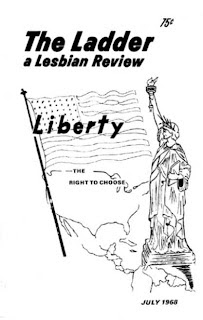 whom Newsom married four years ago in the renegade weddings he performed before a court ruled them invalid on the grounds that Newsom did not have the authority to order that marriage licenses be granted to same-sex couples. Picky, picky, picky! (SF Chronicle report on the Martin/Lyon wedding is here.) An expected flood of queer hitchings and fabulous celebrations has been unleashed by a ruling last month by the California Supreme Court striking down the state's ban on same-sex marriage. A flood of painful, expensive un-hitchings is sure to follow, but, hey, that's equality for ya. We're hoping Del and Phyllis will discover that their fifty-five year partnership has been a good preparation for the rigors of marriage.

Roxie's World raises a glass and every paw in the house to Martin and Lyon, to Newsom, and to the CA Supreme Court. We also sincerely apologize for not having called attention to this monumental development sooner, but we've been awfully busy, as you know, trying to control the outcome of the presidential election. The court issued a strong, broad ruling rooted in the precedent of the same court's 1948 decision on interracial marriage (Perez v. Sharp) and affirming that "an individual's sexual orientation -- like a person's race or gender -- does not constitute a legitimate basis upon which to deny or withhold legal rights." That wee parenthetical "like a person's race or gender" is a significant legal victory because decisions on LGBT rights and issues have hinged upon whether courts saw sexual orientation as like or unlike (the supposedly immutable characteristics of) race or gender. The decision also has national implications, because, unlike Massachusetts, California will issue marriage licenses to couples who do not reside in the state. (Yale law prof Kenji Yoshino blogs on the importance of the decision, which he describes as "revolutionary," here.)

Ahem. We interrupt this sentimental foolishness to remind you that the official position of Roxie's World is that same-sex marriage is an important civil right that should be available to queers in all fifty of these United States, but that marriage as an institution and as a way of structuring intimacy has a dubious history and a tendency to become compulsory in character. We celebrate the expansion of rights, deplore any denial of full equality, and encourage all citizens -- and dogs -- to exercise their rights with care and continue to think creatively about the many possible forms of love. On the other hand, should the day come when same-sex couples are accorded the full panoply of federal benefits and protections attached to marriage, including Social Security spousal benefits, you can be reasonably certain Moose will have Goose in line at the courthouse so fast her head will spin.

By the way, one couple that apparently won't be having a double bridal shower is actress Jodie Foster and longtime partner and co-mom Cydney Bernard. We can't vouch for the story, which we stumbled across in the London Evening Standard, but word is Foster has dumped Bernard for the taller, younger, hotter Cynthia Morton, a writer she met on the set of The Brave One (which we analyze here). Jodie, sweetie, we will allow you a little mid-life crisis if you have to have one, but we would not recommend letting Morton write your next script. The Brave One was not, shall we say, your best vehicle. Call us, Jodie. We really need to talk.

Goodnight, my pretties. May you all be fortunate enough to find someone you can bear to look at, much less say "I do" to, after fifty-five years -- if and only if that is your freely chosen heart's desire and not the compulsion of a culture that privileges the couple as a relational structure.

Dear Santa: They are honest women, but, as I've told you before, they are weird. Love, Roxie

Update: More dish on the Jodie Foster/Cydney Bernard split: This UPI report from late May says that Jodie isn't the only one who dumped a co-mom! New gal pal Cindy Morton reportedly left actress Melanie Mayron (long ago of thirtysomething), with whom she has been raising 10-year-old twins, for Foster. Seems perhaps la Jodie is feeling a tad stressed by the whiff of scandal suddenly surrounding her. Check out this vid of her stuffing a large handbag in the face of a paparazzi trying to photograph her as she was approaching the passenger side of a car being driven by Morton earlier this week. Looks like it's time for somebody to pause and take a deep cleansing breath. What's a matter, Brave One? Is Morton proposing to write a sequel to Panic Room?
Posted by Roxie Smith Lindemann at 8:30 PM