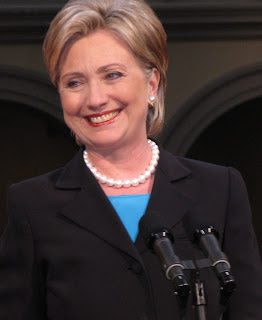 Roxie’s World had three sets of eyes on the scene this afternoon for Hillary Clinton’s incredibly graceful exit from her history-making presidential campaign. Through fortunate timing and clever reading of the situation, Moose, Goose, and Candy Man ended up on the main floor of the National Building Museum in Washington, DC, probably about 20 feet from the podium where Clinton spoke. The floor was packed, and heart-broken but enthusiastic supporters lined two tiers of balconies overlooking the stage in the middle of the magnificent late-Victorian building. They gathered on a searingly hot day to honor and to celebrate the extraordinary accomplishment of the first woman in American history to contend seriously for a major-party presidential nomination. They gathered to mourn the fact that her gutsy effort ultimately fell short and to hear the former candidate exhort them not to give up – on this election, the Democratic Party, or their own dreams.

Moose cried, but the woman of the hour did not. Far from it. She took the stage shortly after 12:30, accompanied by her husband, daughter, and mother, and calmly took command of the occasion. Every word and every gesture made it clear that the formal suspension of her campaign will be but a brief pause in her remarkable journey and that she is by no means exiting the stage of American political life.

Clinton beautifully demonstrated today what the nation will miss if it never has her in the Oval Office. From her opening line, which so gently acknowledged her own defeat and disappointment, Clinton went out of her way to honor and console her supporters. “Well,” she deadpanned when the thunderous cheers that greeted her had died down, “this isn’t exactly the party I’d planned, but I sure like the company.”

Her supporters were weepy; she was serene.

Her supporters were reluctant to embrace the opponent who barely beat her; she was emphatic and enthusiastic, even borrowing his signature “Yes, we can” line to underscore a point she often made on the campaign trail about restoring America’s can-do spirit.

Her supporters were still looking back, still wondering what might have been; she urged them to look and to move forward. “Every moment wasted looking back keeps us from moving forward,” she reminded them. “Life is too short, time is too precious, and the stakes are too high to dwell on what might have been. We have to work together for what still can be.”

Some came with heavy hearts, and her optimistic, encouraging words lightened them. Some came with bitterness toward her opponent or the often misogynistic media, and she exhibited a determination to root out the remaining barriers and biases that impede the full equality of women.

She was motherly, yes, but she showed that maternal empathy or solicitude is in no way at odds with strength, with self-possession, with the capacity to lead. Perhaps in time we will all realize that the great accomplishment of Clinton’s campaign is the incontrovertible evidence she offered that the traditional roles of mother, daughter, and wife are wholly compatible with the duties and demands of the nation’s highest office. She opened our eyes to the possibility that a woman might in some ways approach the office differently, but thanks to her many of us can see that those differences might be assets rather than liabilities.

In the days to come, Roxie’s World will let you know if we’ve decided to heed Senator Clinton’s call to support and campaign for her erstwhile opponent. For now, we pass along a link to the transcript of her marvelous speech, a few photos Moose snapped before her camera battery died, and our heartfelt thanks to Senator Hillary Rodham Clinton – for moving us, teaching us, inspiring us, and expanding the political horizons of our nation.

Godspeed, Senator – We look forward to working with you again soon to realize the dream of a better world.

Update: Video of the speech is here. If you haven't seen it, you must. 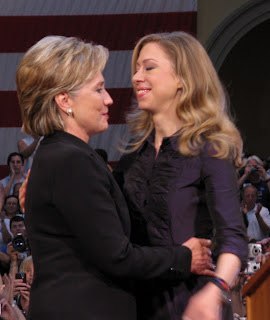