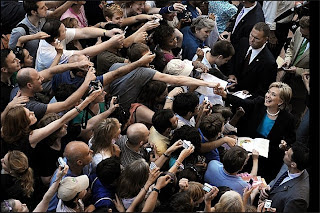 (Please Note: The photo above has no particular relevance to this post. We found it, liked it, and wanted to pass it along before we forgot about it.)

I know you told us yesterday that we should throw our support to your erstwhile opponent in the primary race, Senator Barack Obama, on account of it's really important to elect a Democratic president this year to accomplish all that fabulous stuff that you and we really want to see happen -- you know, achieving universal (or maybe universal-lite, which is what your opponent has proposed) health care, ending the war in Iraq, expanding economic opportunity, protecting the environment, restoring America's standing in the world. We agree with you that those goals are like super-duper crucial, and we spent the whole weekend licking our political wounds and reflecting on your call to us to work as hard for him as we had hoped and planned to work for you.

We were thinking about it, really, in between glasses of wine and steaks on the grill and trips to the furniture store to unload the disposable income we had been planning to invest in your campaign. We were slowly coming around to the idea that in this election we might be the kind of voters who would hold our noses and pull the lever (or punch the card) for the lesser of two evils, especially if Lesser* had the wisdom to put you on the ticket as his choice for vice-president. We were getting there, Senator Clinton, I swear, though Goose was still pretty grouchy about the whole damn primary mess, but then Moose was out doing some late Sunday night internets-trolling and stumbled (by way of TalkLeft) across this weird bit of news about

and I'm afraid that just threw a monkey wrench into the whole works. We immediately dispatched a team to Ishmael's, the bar around the corner from Roxie's World's corporate headquarters, to get Mark Twain and the whole political division back into the office to consider how we should respond to this astonishing development. (They'd been in the bar for several days, drowning their sorrows over your loss.) We knew McCain intended to make a play for your supporters and had already alerted our legions of loyal readers to his nefarious plans, but we had no idea that the senior (and we do mean senior) senator from Arizona would be so cunning, so resourceful, so diabolical in his efforts to lure disappointed Clintonistas into the Republican fold.

We're terribly sorry, Senator Clinton, but (knowing me, knowing you) there is really nothing we can do. McCain has found an iron-clad way to appeal to three of Roxie's World's major, if heavily overlapping, demographic groups: women, disco fans, and the group formerly known as Pretty Boys for Hillary. How can we resist a war hero who pumps himself up for campaign speeches by listening to ABBA's immortal "Take A Chance on Me?"


McCain's campaign blog is even pushing the story, with a brazen appeal to "disaffected Hillary supporters." Please try to understand, Chiquitita, that we had every intention of doing what you implored us to do yesterday. You have, after all, been a total Super Trouper throughout this campaign, and you are and ever shall be top dog and Dancing Queen of our hearts here in Roxie's World. And we really, really get that there are vital issues at stake in this election and that a lot of people will be like totally screwed if Republicans have control of a single branch -- heck, of a single twig -- of government. But, you know, Hill, now that you've been kicked in the teeth in this dirty little game called politics, perhaps you'll understand that we have to follow the guy who shares our twisted musical taste, because, you know, without a song or a dance what are we? Don't worry about the war or health care or the Supreme Court or any of that other bumming stuff. McCain may be an old codger who sold his soul to the re-(s)election of George W. Bush, but he gets that the night is young and the music's high.

Everything will be fine, Hillary, as long as we can dance. Take my hand, Hillary. The sky is blue, why should you be, too? Let the ABBA fan rule the world!

*Lesser shall henceforth be the name by which Senator Obama is known in Roxie's World. We've had fun calling him the Precious and His Hopeness, but we borrowed those terms from, respectively, the brilliant Anglachel and the only sporadically insightful from a conservative perspective David Brooks. Our preference is always for names we make up all by ourselves, and we think we're the first ones to slap this label on the presumptive Democratic nominee. He stands elected to that term in these precincts, so that is that.

Note to Readers: All comments on this post must contain at least one ABBA reference. Them's Teh Rulz of the game, kids, even if we don't know what the name of the game is. (Get it?) Play on.
Posted by Roxie Smith Lindemann at 10:48 PM