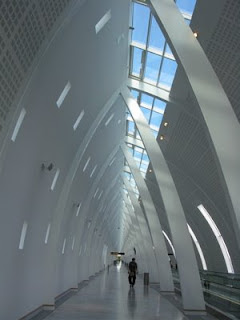 Sorry for the delay in posting, kids. We've had some technical difficulties here in the north country. I think maybe some reindeer are chewing on the cable lines, which is slowing down connection times and making it impossible for Moose to upload the gargantuan files of the 12-megapixel photos from her super-awesome Canon G9. She had to shrink this poetic shot of the airport in Copenhagen down to practically nothing to get it to upload to Blogger. (Facebook friends can see a larger version on the album Moose set up there, "Chicks in the Arctic, 2008.")

Moose is a little too cranky to do one of her witty travel post cards right now, so I'll give you the short version of their trip so far. (She's still working to get all her brain cells and other bodily systems to accept the fact that it's seven hours later than it was when she hopped aboard a plane late Monday afternoon.) They got into Helsinki in the middle of Tuesday afternoon, took a nap, and went out for a lovely five-course meal, with wine pairings, that, thanks to their worthless Yankee currency, cost approximately 7 trillion dollars (which Moose, in an uncharacteristic fit of generosity, had volunteered to pay for, on account of Goose had taken care of arranging all the logistics of the trip). They dined at Havis on the harbor, and had a sumptuous feast that included an appetizer called "The Life of a Fish" (salmon served five ways from roe to smoked), white asparagus in a goat-cheese foam, and a delicate brill garnished with squid and gnocchi. It was delicious, and the service was impeccable, but when Moose translated the total cost into dollars she wondered if she shouldn't have invested that money in some nobler cause than feeding two jet-lagged middled-aged women. She thought about the floods in Iowa, Darfur, the earthquake in China, cancer, the cyclone -- oh, damn, she thought, where was that cyclone? -- and then she nodded off, and when she awoke it was time for the hotel's bountiful, complimentary breakfast buffet.

After breakfast, they skedaddled over to the train station to catch a 9:30 train to Oulu, site of the conference they'll be attending (where Moose will make her international debut as a "digital humanist," all on account of ME, a dog). The train ride was six hours long through some of the flattest country they had ever seen. "It's like Indiana," Moose said at one point, "with lakes and a lot more trees." In the course of their journey, they had another funny food-related incident, this one involving a woman named Marla who didn't seem to understand that their first-class tickets entitled them to free food in the dining car. The tickets said, in English, show your tickets in the dining car and get a sandwich, yogurt, and muesli (because apparently all Finnish meals are required to involve muesli in some form), but Marla's menu evidently said something different because she smiled politely and said a great many Finnish words to them that roughly translated into, "No free food for spoiled Yankee lesbians," so they returned to their seats, said they weren't hungry anyway, and went back to fiddling on their computers. Marla showed up at their seats in a few minutes, demanded their tickets, and went away. This made Goose quite nervous, but Moose said, "Don't be silly. This woman is not going to steal our tickets and run off to the North Pole. Trust the universe." Marla came back a few minutes later, talking on a telephone, handed back their tickets, spoke more words in Finnish, and walked away saying something about coffee and free cookies. They laughed hysterically, had a couple of cookies -- and were ravenous by the time they showed up at the opening reception for the conference a few hours later.

So, there you have it. They are now in Oulu and have hooked up with their digital humanist pals, with whom they dined on smoked reindeer pizza (see below) for far less than the cost of one day's worth of funding for the wars in Iraq and Afghanistan. Reindeer is really quite tasty, you know, and they don't feel the least bit guilty about chowing down on Rudolph and his friends. Life is hard here in the rugged north. You eat what you can get -- a free cookie, a pop cult icon, a $400 nibble of fish -- anything Marla will let you have. Peace out, vikings.