Life, Refracted Through Lit
My typist sits in her red chair, thinking of Godfrey St. Peter, protagonist of Willa Cather’s novel of 1925, The Professor’s House. It is a brilliant but ultimately grim book, the story of a man worn down by the ordinary stresses of living and by the sense that the choices of his adult life – 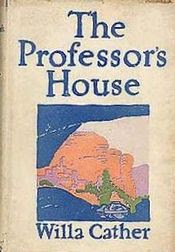 marriage, family, career – had been accidents or mistakes, “a chain of events which had happened to him” but which “had nothing to do with the person he was in the beginning.” That alienation leads in the end to St. Peter’s complete indifference toward his family, even, indeed, toward his own existence. Nearly asphyxiated by a poorly ventilated stove in his attic office, the professor never resolves to save himself or let himself die, but is rescued by the intervention of the family seamstress. In the last paragraph of the novel, St. Peter reflects upon the effects of this latest accident and considers the prospect of being reunited with his family, who are at that moment sailing home from Europe on the Berengaria:

His temporary release from consciousness seemed to have been beneficial. He had let something go – and it was gone: something very precious, that he could not consciously have relinquished, probably. He doubted whether his family would ever realize that he was not the same man they had said good-bye to; they would be too happily preoccupied with their own affairs. If his apathy hurt them, they could not possibly be so much hurt as he had been already. At least, he felt the ground under his feet. He thought he knew where he was, and that he could face with fortitude the Berengaria and the future.

As an English prof, Moose is forever telling her students not to treat literary characters as if they were real people, but she has always been a little put out with Godfrey St. Peter. As a fiery young feminist, she deplored his obliviousness to his dependence on the female members of his household, his arrogant assumption that his hurts were so much greater than theirs. Even now, when you might think she’d be more sympathetic to a character clearly suffering from a midlife depression, Moose remains stern and impatient with Cather’s out-of-sorts history prof. “Accidents?” she snorts as she considers the end of his story. “You think your whole cushy life has a been a mere chain of events rather than a series of choices? And ‘fortitude’ – Is that the best you can do, man? I mean, sure, fortitude is all well and good if you’re taking a long hike, but don’t the people closest to you deserve better than that? What a load of crap.”

Dinner, With Photographs
Moose didn’t really want a party, but a dinner in New York with the old friends, the Jersey crew and the dear, transplanted neighbors, well, that would be lovely, like a Woody Allen movie of the mid-80s – all soft lighting, good wine, and clever repartee. At a certain point, though, it was clear that the guest of honor was supposed to have Something Significant to Say. And she didn’t. She had thought about it. Kind of. But she’d had a conference paper to write, and she was having a hard time knowing what to feel and think and say about turning fifty. In one corner of her mind, she thought about the beloved father dead at 60, the grandmother dead at 97. Do I have 10 years left – or 47? Or 10 days? Who knows? In another corner, she thought, What have I learned? What do I know? What wisdom have I picked up along the way? 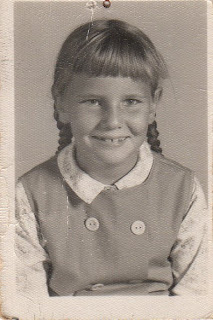 And then she caught sight of the pictures. She figured they would be there, because that is part of what friends do for friends turning fifty, but actually seeing them took her aback. Some were as familiar as an old pair of socks, but others were utterly, startlingly strange. Her older sister had passed them along to Goose, and she had no memory of their being taken. As the pictures cycled through in an endless loop, she stared at them and tried to orient herself in her own life: When did I have that shirt? she wondered. That hair? That intense look over a tape recorder? Suddenly, she realized, she did have something to say.

She asked her hostess to help her find a poem. Do you have The Dream of a Common Language? she asked. (And she realizes Adrienne Rich has figured into several of our posts on aging, but she can’t help it. Rich is, like Moose, a white, middle class, American lesbian. Her words and her experiences resonate powerfully with Moose’s as she tries to make sense of her mid-life.) They found an excerpt online, exactly the passage that had popped into Moose’s mind as she began to compose her thoughts. They printed out the passage and returned to the table. Moose began to speak.

“I look at these pictures,” she says, “taken at different moments, in different places, and I think of myself, uprooted at eleven, from the only world I had ever known – from my grandparents, a daily part of my life in a small town where my family was a known, established quantity. From eleven to eighteen, I lived in four different towns. Every year or two, I had to acquire a new set of friends, adjust to different teachers and ways of teaching, and take on a new accent. What I realize in looking at these pictures is that I learned early on that life is largely a matter of improvisation. You just make it up as you go along – and that’s okay. I don’t see what I had to do in adolescence as a tragedy. I learned from the experience that people can be tremendously resilient. You make new friends. You learn new things. You adjust to changing circumstances. It doesn’t mean there’s no core self or continuity. It means you have to be flexible, and that’s not bad. It reminds me of a passage from Rich’s “Transcendental Etude”:

No one ever told us we had to study our lives,
make of our lives a study, as if learning natural history
or music, that we should begin
with the simple exercises first
and slowly go on trying
the hard ones, practicing till strength
and accuracy became one with the daring
to leap into transcendence, take the chance
of breaking down in the wild arpeggio
or faulting the full sentence of the fugue.
--And in fact we can't live like that: we take on
everything at once before we've even begun
to read or mark time, we're forced to begin
in the midst of the hardest movement,
the one already sounding as we are born.

“What I hear in this passage is that you have to rely on instinct and improvisation to get through life. You never really know what you’re doing or where you’re going. You just make it up as you go along and trust that you’ll get somewhere worth going in the end. As I look around this table, I feel so fortunate to be surrounded by people who are so smart and so kind and so creative and so patient. Thanks for putting up with me as I tried to figure out who I was and what I was doing. Thanks for letting me improvise my life.”

She didn’t plan to say it, but, as the words came out, she knew it was one of the truest things she’d ever said. Thanks, everybody, for your love, your forbearance, your own marvelous improvisations. Here’s hoping the second half century is as full of joy and adventure as the first has been.
Posted by Roxie Smith Lindemann at 2:08 AM