Yes, We Hear You Now 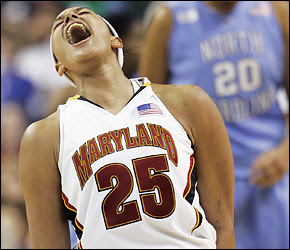 Nice game. Not to put any additional pressure on you or anything -- as if trying to win Maryland's first ACC championship in 20 years weren't pressure enough. in your senior seasons. when you're bucking for a second national championship to bookend the one you won your freshman years. when KT is clearly sick as a dog. -- but we just thought we'd let you know that tomorrow is a really special day in Roxie's World, and, you know, it'd be extra super swell if you guys could bring a little hardware back to College Park to make the day complete.

You may or may not know that tomorrow is International Women's Day. That alone makes March 8 a day of celebration in estrogen-fueled households such as ours. But March 8 is also the day we commemorate the unholy alliance of Moose and Goose, the basketball-crazy English profs who brought Roxie's World into being. That's right, kids. Tomorrow, March 8, 2009 is the moms' 25th anniversary! And all they want for the occasion -- aside from the love and good wishes of their dog and friends -- is for y'all to cut down the nets tomorrow afternoon in Greensboro. Got that? Yeah -- the moms, the sign ladies, the ones who re-baptized Marissa as "Shoulders" -- they've defied logic, heteropatriarchy, and the confident predictions of a few long-forgotten grad-school naysayers and managed to stay together for a quarter of a fricking century. Which could mean that Moose exaggerates slightly when she claims she was only 7 when they got together in 1984.

Show 'em you love 'em, women. Show 'em you know who rules. Go kick you some Blue Devil butt tomorrow. You deserve the win, and the moms want it more than anything on dog's pretty earth. We promise we won't pop any corks 'round here until the game is over. KT, get a good night's sleep and see if you can kick that bug out of your system. Shoulders, get a nice massage to make sure you've recovered from that nasty foul some desperate Tar Heel put on you in the second half.

Game time is 1 p.m. We'll be pulling for you, women, and the champagne will be on ice.

Yours sincerely,
Roxie
Posted by Roxie Smith Lindemann at 4:30 PM