(For previous posts on the funding problem in higher ed, click here, here, and here.)

A bullet was dodged at Queer the Turtle U this week, as the university senate voted overwhelmingly against a post-tenure review proposal that included the threat of salary cuts for faculty who are judged to be performing “substantially below expectations” in two consecutive annual reviews.

You read that right: SALARY CUTS. Were debated on a campus where the merit pool this year is . . . hang on, wait a second, let me check that number for you – oh, right: empty. And where faculty and staff are already in the midst of furloughs undertaken to reduce the university’s current year salary budget by $6.86 million. Which means, for example, that our household, which contains two QTU profs, will lose close to $5000 in income between now and June 30, no matter how far above expectations the moms perform.

(Furloughs are calculated on the basis of compensation. Any employee of QTU, except for grad students, earning more than $30,000 has to take at least one furlough day. Employees earning $90,000 or more take five. Oh, and for faculty, furlough days must be taken on non-teaching days, because, you know, we wouldn’t want the public to get the crazy idea that it takes money to run an institution of higher learning.)

Note to Moose: That trip to Greece you wanted to take to celebrate your upcoming monumental birthday? Forget about it. Stay home this summer. Plant a garden. Type more for me.

Note to Goose: That discipline-shifting digital project you published this year? Good thing you didn’t do it for the money, because you won’t be getting a merit raise for it!

Y’all know the moms are insanely loyal to the institution that employs them. Shoot, if they had any more Terpitude, they’d have shells on their backs. They also have enormous respect for the folks who run the place and share their determination to move QTU forward, despite the challenges posed by the economy. In this instance, though, the moms forcefully – but respectfully, of course – part company with the big men (and women) on campus both on the substance of the proposed post-tenure review policy and on the cruel ineptitude of its timing.

Regarding the substance of the policy, the hard-working profs of Roxie’s World have no problem with the idea of post-tenure review. What they don’t understand is why the Faculty Activity Report they dutifully file every year in connection with departmental merit assessments (conducted, like this year, even when there is no money available for merit raises) does not satisfy the demand for post-tenure review. The merit reviews conducted in the moms’ department take every aspect of a faculty member’s duties – scholarship, teaching, and service – into account. Over time, merit allocations serve very effectively to penalize faculty for under-performing. The moms could point to several examples in their own college of associate professors retiring on salaries lower than those of newly hired assistant professors. (Salary compression is a problem, in part because merit pools have been so small in recent years, but that has nothing to do with merit as a mechanism.)

Now, we might debate whether it makes sense to have colleagues evaluate one another in this fashion, since in most professions performance reviews are conducted by supervisors rather than co-workers. The small world of an academic department likely contains one’s most intimate friends as well as one’s most bitter enemies, so it’s a safe bet that such evaluations are not exactly objective. One hopes that they are fair, but humans being human, well, who knows? Still, that issue was not on the table in the QTU proposal for annual performance reviews, which is scrupulous in deferring to departments to develop their own procedures and conduct reviews of their own faculty, as they have done from time immemorial. Indeed, careful scrutiny of the proposal reveals that the only thing genuinely new about it is the idea of cutting base salaries for deficient performance. 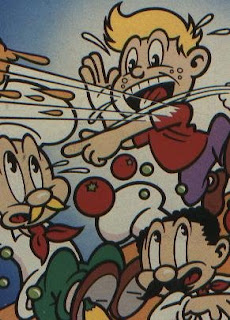 Moose closes her eyes and tries to imagine what a meeting of her department’s salary committee would be like if the committee were obliged to consider cutting colleagues’ salaries in the midst of an economic catastrophe that is already pinching faculty on all sides. Your classes may get bigger, they are told. Your options for publication may get fewer, they well know. The pension fund you were counting on may disappear altogether. And now we’re going to cut your salary because we don’t think you’re doing your job well. But, hey, we’ll assign you a mentor to help you get back on track. We’ll even help you write a development plan – with benchmarks and everything! Oh, wow, thanks.

Between them, the moms have more than forty years of experience in higher education. They are not surprised when students and the general public attack faculty as arrogant and out of touch for fighting to protect tenure or for chafing against a top-down corporate model that is in so many ways inimical to the autonomy necessary for scholarly and creative work. It is discouraging, however, to see their own administrators supporting draconian policies targeted at the chimerical figure of the overpaid, under-productive faculty member. Goose compares that figure to Ronald Reagan’s apocryphal welfare queen, whose mythical laziness and irresponsible fecundity were used to justify the dismantling of federal aid for the economically disadvantaged. Given the amount of time faculty are required to spend on various forms of reporting and assessment nowadays, the assertion that more oversight and accountability are needed is laughable at best, wholly disingenuous at worst. One colleague who called upon the senate to vote down the policy described it as a sledgehammer being used to hit a tack.

“Where is this overpaid, under-productive piece of deadwood?” Moose said to a friend, a high-level administrator on campus who supported the proposed policy. In response, the friend offered not an example but a vague accusation: “You’ve got your head in the sand.”

Really? Moose thought as she headed back to the office to tend to the piles of scut work that mean it’s spring on campus. She didn’t go to the senate meeting because she felt pressure to finish some of that work so she could devote spring “break” to writing the conference paper she’ll be giving next week. She also knew her position would be well represented by senators and colleagues in her department, who had spent the previous weekend marshalling opposition to the proposal. By Thursday evening, the sense of relief on campus was palpable, even if everyone knows the issue isn’t going away. It will be revisited, one hopes with greater compassion and perhaps more honesty about what its objectives truly are.

That the proposal went down is not surprising. That it was entertained at all in the midst of such profound economic anxiety is, we are sorry to say, unconscionable.
Posted by Roxie Smith Lindemann at 6:51 PM