No Graffiti Artist Left Behind

Spotted today on the Sligo Creek Trail (click to embiggen if you can't read the bottom line): 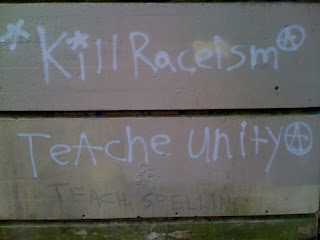 (Photo Credit: Moose, with her iPhone)

The following items are related to the above photo only in the sense that they are things that also caught our attention on a lazy misty Sunday in March that felt more like October. Running across them reminded Moose that there was a reason she used to spend about an hour every morning of her life running her eye over every single page of The Washington Post. Sometimes a story grabs you. It may not be the biggest news of the day or the most important issue of the moment, but it catches you, for one reason or another, and you end up being pleased for the unexpected bit of knowledge or delight the story provides. Such serendipitous encounters happen online, too, but Moose realizes there is still plenty of good writing in the Post, even as one section after another shrinks or falls away, and she misses a lot by not curling up with the dead-tree edition on a daily basis.

Yes, Moose feels responsible for the decline and fall of the American newspaper industry. Assuage her guilt by going to read these stories right now:

"The money should be plowed into sacrilegious art, so that Christian groups can be offended and then hire a bunch of lawyers to sue somebody," he said. Then First Amendment groups hire their own lawyers, and talk radio hosts on both sides sell more ads, he said. You see where this is going. "That would probably create more jobs," he said, "than just a picture of . . . a ship at sea." 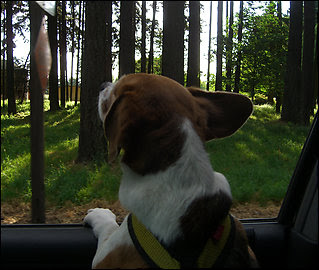