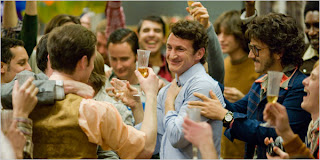 When you are so full that gravy is oozing out of your pores and you've already made your way through the safe topics of conversation -- both of them -- with your family, what do you do with the rest of Thanksgiving weekend? You go to the movies, of course. The moms ventured out with the Mother of the Moosians to see Baz Luhrmann's Australia on Friday and caught Gus Van Sant's Milk Saturday evening after the MotM had safely returned to the heartland of America. Both films earned a paws up from the tough critics of Roxie's World, though Milk comes with a serious hankie alert. It will make you cry, kids, repeatedly, even if you aren't a menopausal queer still furious over the passage of California's Prop 8. We command you to see it, but be prepared for a little public weeping. Don't worry -- Everyone else in the theater will be wiping their eyes right along with you.

If you like Baz Luhrmann, you will love Australia. It's big, it's meta, it's gorgeously filmed, it's at least 20 minutes longer than it needed to be -- and yet no one in our party snuck out for a potty break before the closing credits had stopped rolling. A couple of pithy sentences from Ann Hornaday's Wa Po review capture the whole adventure rather nicely:

[Australia] doesn't wink as often as it genuflects toward its massive subject and, even more worshipfully, toward old-school Hollywood schmaltz. A wildly ambitious, luridly indulgent spectacle of romance, action, melodrama and revisionism, Australia is windy, overblown, utterly preposterous and insanely entertaining.

Insanely entertaining, people -- because you want to see Nicole Kidman fly across the screen on a horse as if she were born with a whip in her hand. Because you need to see Hugh Jackman without his shirt on. Because you love a multi-culti cutie-pie, and Brandon Walters, who plays the mixed race child of an Aboriginal woman and a white man, steals the show with his winsome smile and his remarkable affinity for The Wizard of Oz (told you the film was meta, didn't we?). The racial and colonial politics of Australia are no doubt a whole lot more complicated than its earnest message of love conquering difference and history seems to imply. (A telling detail is that, as in most such fantasies, dark-skinned characters who are allied with good-guy white characters tend to get killed, while mixed-race characters survive -- even though, as is the case here, tribute is paid to the necessity of a connection to Aboriginal culture.) Nonetheless, Australia succeeds because it isn't interested in nuance or analysis. It is interested in sentiment and spectacle, and it delivers both in spades. If you get that, you'll enjoy the long, bracing ride Luhrmann has in store for you. (Manohla Dargis's NYT review of Australia is here.)

Van Sant's Milk would be a remarkable film at any moment, but in this moment -- thirty years after Harvey Milk's murder, along with San Francisco Mayor George Moscone, in November 1978 and three weeks after the passage of California's Prop 8 -- it has a poignancy and a political urgency that one can't quite imagine it having at any other time. Just three weeks before his death, Milk was the driving force behind the defeat of a California ballot initiative that would have led to mandatory firings of gay teachers in the state. As told in the film, the story of Milk's triumph on Prop 6 is a thrilling come-from-behind victory made possible by shrewd organizing and a politics of visibility. Over and over in the film, we see Milk demanding that queers come out, insisting that the battle for equality will be won by getting the heterosexual majority to see the homosexual minority. "If they know us," he insists, "they don't vote against us." Milk's tactics stand in stark contrast to the mealy-mouthed campaign waged by opponents of Prop 8, who were reluctant to place LGBT people and families at the center of the battle, pitching it instead as an abstract matter of rights.

Dennis Lim has an excellent piece on Milk in Slate that muses on whether Prop 8 would have passed if the film had opened in October rather than last week. (Van Sant himself entertained this question in an interview with the San Francisco Bay Guardian and conceded that Milk, wily tactician that he was, would have opened the film earlier.) That question is, of course, impossible to answer, and we needn't burden the film or its maker with such responsibility. What we can do is use the occasion of the film and the painful passage of Prop 8 (and the other anti-gay initiatives that succeeded on Nov. 4) to re-acquaint ourselves with Milk's legacy and to re-assess the priorities and tactics of an LGBT political movement that has been far less effective than he was in the sole statewide referendum battle he fought before his tragic death. In the shadow of Prop 8, it is excruciating to watch Sean Penn's sublimely human Milk agonize on screen, thinking the battle against Prop 6 is doomed, and intoxicating to watch him revel in the unexpected victory. Thirty years later, we should be angry that the foes of equality are still subjecting LGBT civil rights to popular votes, but we should be ashamed that we haven't yet found a more effective means for waging these ballot battles. Thirty years later, we can honor Milk's memory by finally proving we have learned the lessons in democracy he worked so tirelessly and courageously to teach. See the film -- and then get to work.

(A. O. Scott's NYT review of Milk is here. Christie Keith has a review up on After Ellen. Keith also has an interview with Alison Pill, who plays Anne Kronenberg, the lesbian who managed Milk's successful campaign to get on the San Francisco Board of Supervisors. It's got some comments from Kronenberg and Van Sant as well.)
Posted by Roxie Smith Lindemann at 3:59 PM