The Washington Times reports this morning that the administration of President-Elect Barack Obama will not move forward on repealing the ban on openly gay people serving in the military for months and perhaps not until 2010. The rationale for the delay in overturning the so-called "Don't Ask, Don't Tell" policy -- under which more than 12,500 service members have been discharged since its implementation in 1993 -- is to allow time to build a consensus among the Joint Chiefs of Staff before presenting legislation to Congress. Even Aubrey Sarvis, executive director of the Servicemembers Legal Defense Network, seems on board with the delay. He has spoken with the Obama transition team about how to proceed on the issue and has the last, discouraging (to us) word in the article:

"What's the reality for the new administration?" he said. "Financial crisis. Economic upheaval. Health care reform. Environmental challenges. Where does 'don't ask, don't tell' fall in all this? I would say it is not in the top five priorities of national issues."

Question: Will the Obama administration order investigations and discharge proceedings arising from "Don't Ask, Don't Tell" to be halted during this period of consensus-building?

Question: Should we be concerned that the delay will serve not to build consensus but to give the implacable foes of repealing the ban a chance to recover from the bitter defeats of the election and use this issue to re-energize and organize their base? The beast must be fed, after all, and we have a hunch it won't be satisfied with a few hunks of bloody Alaskan turkey.

Question: Golly, isn't it getting a little crowded under that bus? We never really thought Obama was a great friend to teh gays, but at this point overturning "Don't Ask, Don't Tell" hardly qualifies as a profile in political courage. A Wa Po/ABC News poll this past summer showed that 75% of Americans now support allowing gays who are open about their sexual orientation to serve in the military. Earlier this week, more than 100 retired admirals and generals released a statement calling for a repeal of the ban. Heck, Mr. President-Elect, you could even justify the repeal on cost-saving grounds. SLDN estimates that "the cost to replace and train service members discharged from fiscal years 1994 through 2003 exceeded $363.8 million." The nation is in the midst of two wars and a deep recession, Mr. Obama. We can't afford to lose a single individual willing to serve!

We get that the mantra of the incoming "No Drama Obama" administration is to avoid all of the alleged mistakes of the supposedly inept early days of the Clinton administration, but our long memory tells us that the real mistake around gays in the military was Bill Clinton not having the guts to stand up to Sam Nunn and do the right thing by executive order. He could have. He didn't, and the result was a disastrous compromise that resulted in an increase in prosecutions and discharges of soldiers who refused to lie about something that had no bearing whatsoever on their loyalty or service. Justice delayed is justice denied, Mr. President-Elect, and America's gay soldiers have already waited far too long. Don't blink. Don't delay. Do the right thing. 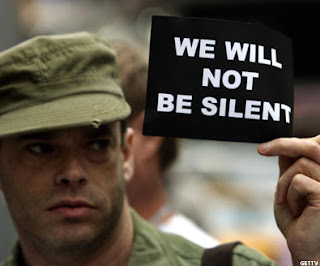 (Photo Credit: Getty, via The Advocate)
Posted by Roxie Smith Lindemann at 11:30 AM